The majestic red oak located on Baylor's campus next to Roddy Theater fell recently. In commemoration we re-publish a poem written by former headmaster, Jim Buckheit. 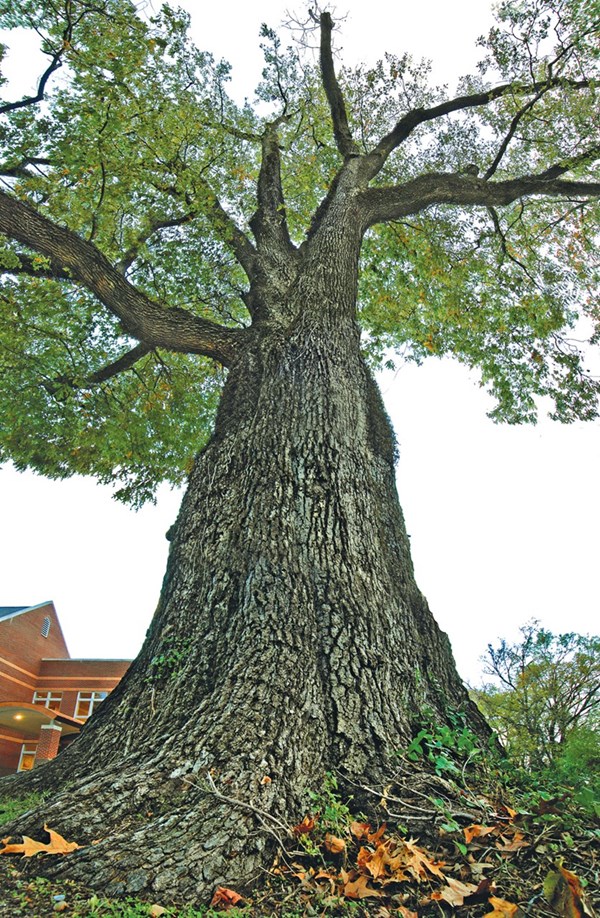 It is a hazard, and it must come down.

But this monument, five times my age or more,

a sense of being anchored to the earth.

Its seed burst into life

when God alone could claim this land,

and when a sapling,

brushed its wispy branches aside.

It witnessed meadows ravaged and restored,

by flood and wars, and may have

comforted a slave bound to its trunk,

as the lash wounds seeped.

Now a home to ants and bees,

its bark flaking off in chunks

it will soon decay in pieces,

some so well varnished

they’ll last another century or two,

relics with no particular meaning

to children who stroke their polished surfaces.

More from Jim Buckheit (written in 2004)
About two years ago, I thought the time had finally come to cut down the Red Oak that towers between the Roddy Theater and Ireland Studio. It was infested with parasites and misshapen from radical pruning to keep its branches from falling on students who lounge on the benches nearby. I prepared a eulogy. But we all wanted to hang on, as if it were a grandparent on life-support. The tree’s demise is imminent, but I’ll miss the funeral. So let me pay my respects here and now.

In Europe, the battlements of medieval fortresses crumble block by block into their moats. In Asia, great deities carved in stone are washed one grain at a time down river. Here on this once sacred ground, an ancient heritage of living in the word, rather than on it, held out much longer than elsewhere. Consequently, our only true relics live and die. They are not grand fabrications. They are beauty and sustenance and shelter from the storm. They are old friends, and when a great one passes, we should thank it and celebrate its generous life.