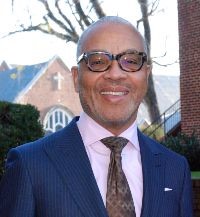 Dallas arrived at Baylor in July of 2000 from Fisk University in Nashville, TN. Dallas believes that working in an educational environment is “not a job, but a commitment.” Before Fisk University, Dallas was the Vice President for Finance of Suomi College (on the Upper Peninsula of Michigan), and for seven years prior to that position, he worked as an accountant and comptroller for Shaw University. During Dallas’ seven years at Shaw, the school underwent an enormous transformation, more than doubling its student body, undertaking a $25 million capital campaign, and spending more than $20 million on construction.

Dallas's work at Baylor, he says, is about the future. Instead of putting out fires, he has the time to think creatively about the future of the institution. He says, "What I'm excited about is being able to plan what we need to support the goal of becoming one of the best institutions around."

Dallas is the father of three sons: Rasheed, Dallas, and Evan, all Baylor graduates.