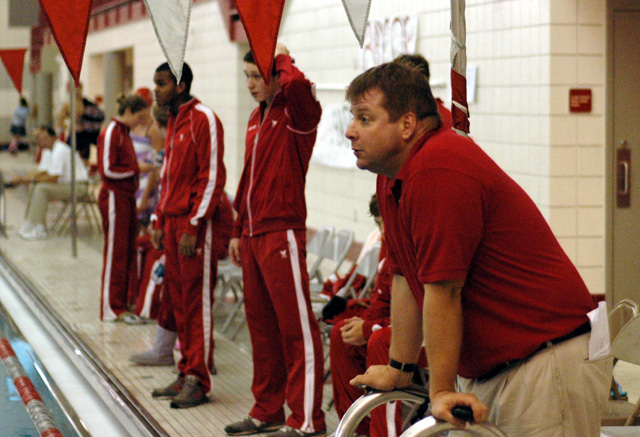 Coach Dan Flack is a member of the United States Swimming National Team Coaches List, and is the only High School Coach on the National Team Coaches List for 2019. Coach Flack is recognized by the American Swimming Coaches Association as a Level V coach, the highest level attainable, composing the top 2-5% of coaches in the USA. In his 1154-year career as the Director of both the Baylor School and Baylor Swim Club programs, Coach Flack has enjoyed remarkable success.

The outcome has resulted in a consistently nationally recognized program both in the pool, administratively and academically.

Prior to Baylor, Flack led the championship Raleigh Swimming Association from 2002 – 2006. RSA was selected as United States Swimming Gold Medal Club Excellence for 2005-2008. Coach Flack trained two qualifiers for the 2004 Olympic Trials, trained five different swimmers who are qualified for the 2008 Olympic Trials and has had numerous national champions and finalists at both the junior and senior level. Coach Flack has trained a dozen high-school aged swimmers to top 100 in the world rankings. In 2004, RSA won the men’s, women’s and combined team championship at the NCSA Junior Nationals and repeated as men’s champs in 2005. Flack was recognized as the NCSA National Coach of the Year in 2004.

Prior to his position at Raleigh, Flack was the head coach and program director for the Bengal Tiger Aquatic Club in Baton Rouge, where he coached Pan American Games Silver medal winner Jarrod Marrs, and was awarded Louisiana Coach of the year honors in 1999 and 2000. He also served on the 1999 Women’s NCAA Women’s Champion University of Georgia coaching staff under Head Coach Jack Bauerle, as well as the assistant coach at Germantown Academy in Philadelphia under Dick Shoulberg. Both Baurele & Shoulberg have been US Olympic coaches.

Flack earned his B.S. degree from the University of North Carolina at Chapel Hill. Coach Flack lives in Chattanooga with his wife Susan, children Sam and Julia, and step-children Trey, George, Ellie, and Lucy.