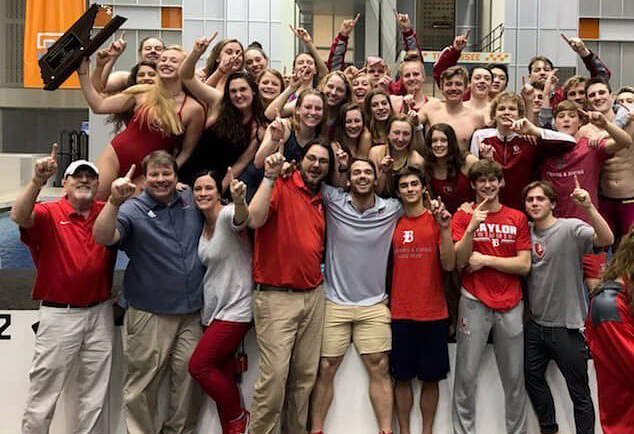 John Bonds has coached diving in the Chattanooga area for the past 45 years, helping myriads of developmental divers and producing numerous qualifiers for regional and national championships. In those years, fifteen of Bonds' divers have won Tennessee State High School Championships, several have received several college scholarships, and many have been inspired to become diving coaches themselves.

Over the course of his career, Bonds has coached at Baylor during three distinct periods. He is currently in his second year of his most recent stint, but he also coached at Baylor during the glory years of the late 70’s and early 80’s and then again during the late 80’s and early 90’s. Bonds has produced many high school All Americans, including a tenth grade student in 2007, and with the young talent he currently has at Baylor, he looks to bring the program back to national prominence in the coming years.

Coach Bonds has been heavily involved AAU Diving organization throughout his career. He coached the Chattanooga Diving Club for 24 years and is now the coach of the Baylor Diving Club.

Passionate about the sport of diving and one of our community’s most effective ambassadors for the sport, Bonds has been one of the greatest promoters of diving within the Chattanooga Area Swim League and has been instrumental in its development over the years. He runs several clinics each summer to teach basic fundamentals to both athletes and coaches, and he advises the league and the individual clubs on how to create a safe and positive environment for each diver. At Bonds' urging, the CASL board expanded diving into all of the age group classifications and allowed swimmers to dive in CASL meets without counting the event against their swimming event limit. His energy and innovations helped the CASL expand the number of diving participants tenfold during his tenure.

Coach Brian Gill enters his second year as a middle school coach at Baylor, and his first year as the Head Age Group Coach of the Baylor Swim Club. During his first year at Baylor, Coach Gill put together a Southeastern Swimming Championship relay team, won a Southeastern Middle School combined Championship, created growth in the age group program, and developed the swimming lesson program.

Coach Gill spent his summer as head coach of CASL's Signal Mountain Swim Team, a team that boasts more than 200 swimmers. The Green Giants came away with the Swimming and Combined Championships at the 2007 CASL Swimming Championships this past summer.

Before coming to Baylor, Coach Gill served as the Head Age Group Coach for the Raleigh Swimming Association in North Carolina. While working under Dan Flack, now the Baylor head swimming coach, he helped expand the RSA program from 120 swimmers to 280 swimmers in a four year span.

Coach Gill began his career as RSA’s Head Age Group Coach in 2001 and in only his second year with the club, received a Vocational Excellence award from the Cary Kildaire Rotary Club recognizing his work with children in coaching. Gill focuses on developing proper stroke technique while striving to instill a love and enthusiasm for the sport of swimming and bases his coaching on the philosophy that every swimmer in the program is important, regardless of performance level. The RSA Age Group Program thrived under Coach Gill producing State and Sectional Champions in 2003 and 2005 and in 2005 he achieved American Swimming Coaches Association Level III status. In addition to his Age Group coaching responsibilities, Gill also oversaw several developmental clinics with the RSA.

A competitive swimmer since the age of seven, Gill swam for Lochmere Swim Club for 10 years and was a member of RSA and the Cardinal Gibbons High School swim teams. He furthered his involvement in competitive swimming at age 16, coaching summer league swimming for the Glenn Ridge Swim Team and later became the Head coach for Lochmere Swim Team in Cary, NC, where he managed 400 swimmers and five assistant coaches. In his four years at as head coach, the Lochmere Monsters captured four Cary City titles, posted three single loss seasons and one undefeated season, and won the 2003 TSA Summer League championship.

Gill and his wife Leah live on the Baylor School Campus with their dog Houston.

An accomplished swimmer in the Chattanooga area growing up, Laura Pitman swam for Mercersburg Academy in Mercersburg, PA during her high school years. She was a high school All-American at Mercersburg and a member of a national-record-setting medley relay team that was an Eastern prep school champion. She was also an All-American swimmer at the Unviersity of Tennessee.

Pitman currently is the assistant coach with the Baylor Middle School team, coaches the novice group with the varsity, and helps with other groups as needed. In addition, she is responsible for the daily operations of the Baylor Swim Club.

A 2013 inductee to the Chattanooga Sports hall of Fame, Coach Pitman lives in Hixson with her husband Wes. Her daughters, Sloane and Arden, are both former Baylor and Lady Vol swimmers.

Rob Parks is a Chattanooga native who started his swimming career in 1983 with the Cumberland Currents, where he would swim for 11 seasons. He quickly fell in love with the sport and began swimming year-round with GCAC that same year.

Parks swam for Baylor in his high school years and was part of the 1992 state championship team. He fell back into the sport several years later when his son became a swimmer and he joined the board for the Ridgeside Dolphins. In 2015 he became the head coach of the Dolphins and remains so today. In 2018 he returned to Baylor as a member of the IT department and also began coaching the AquaRaiders under the tutelage of head coach Dan Flack.

When he is not at work or at the pool, Parks enjoys reading and spending time with his wife, two adult children, and three dogs.

Jake Sosna is an alumni of the Baylor School and was a former NISCA High School All-American for the AquaRaiders. During his time at Baylor, he was part of three state championship teams and two Independent High School National Championship teams. Sosna was also a member of several school and state record relay teams. Following his years at Baylor he went on to swim in college at the University of Alabama.

Sosna will graduate from Alabama with a degree in history during the summer of 2020. His certification in Precision Nutrition rounds out his education and passion for health and fitness. While not at the pool or school, Sosan likes to use his free time to workout, attend sporting events, and hang out with family.