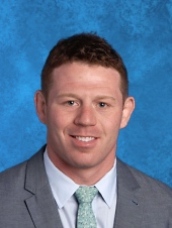 Intro
“Never in my wildest imagination would I have dreamed that schools like Baylor existed.”
Biography

When Rex Kendle took his first class at Michigan State University (MSU), there were more students in that one classroom than there were in his high school in Edwardsburg, Mich., a town of 1100 people.

Rex was equally awestruck when he first stepped onto the Baylor campus. A four-time All-Academic Big Ten wrestler at MSU, Rex first heard about Baylor from head wrestling coach, Ben Nelson. Surprised to learn that there was a successful program at a Southern school—wrestling is a much bigger sport in the Midwest—Rex was even more surprised when he arrived to interview in Chattanooga. “Never in my wildest imagination would I have dreamed that schools like Baylor existed. The facilities are unreal compared to a traditional Midwest high school, and so many faculty members have advanced degrees; it’s hard to believe it’s a high school.”

Rex, who was an Academic All-American in his senior year, knew early in his college career that “teaching was where I was supposed to be.” He earned a biology degree with a minor in chemistry and then spent a year teaching both biology and chemistry (and coaching wrestling) at a Michigan high school as part of an internship. At the end of that fifth year of study, Rex received his teaching certificate from MSU and credits towards a master’s degree. He plans to complete his master’s degree over the next few years.

In addition to wrestling and science, Rex likes to hike, camp, and hunt. He is a college football fanatic, and Notre Dame is definitely his team.

Although he wasn’t looking for a Southern school or an independent school, Rex could not be happier about his appointment at Baylor. “This is an amazing place.”