Before Roy Fuller's interview for this pro­file, he made a list of Baylor teachers who had influenced him. "It's a long list," he warned. Fuller was fortunate to have found so many mentors as a Baylor seventh grader; his father had died six months before, and his mother, Lou Burdeshaw, who still lives in Chattanooga, was fighting cancer. "What Baylor gave me was a confidence about myself and the world around me that I didn't have coming in," said Fuller. "I could have become a bitter teenage kid, but the teachers at Baylor made me believe in my­self, believe that I had something positive to contribute to the world."

Two of the teachers Fuller remembers as most influential were math instructors. Jack Murrah taught Fuller calculus and was adviser to The Baylor Notes when Fuller worked on the newspaper, and Trudy Cunningham was his pre-algebra instructor. "I don't know how to describe Jack Murrah's influence; it was so all-encompassing," said Fuller, who remem­bers feeling as comfortable with his teachers as he did with fellow students. "They were so generous with their time that it felt like one huge family."

As much as he admired his math teach­ers, Fuller's strengths were in English, the­ater, and foreign language. He holds dear his memories of the English and Southern literature class taught by Bill Cushman '59, Jean McGee's American literature class, and Steve Oehman's eighth grade English class, where Fuller first discovered a talent for writing. He was exposed to theater by the school's first drama teacher, Rosemary Knower. "She was such a dynamo," said Fuller. "I learned the­ater games from her that I still use in class." Later, a Shakespeare class taught by Schaack Van Deusen '61, who also directed Fuller in A Midsummer's Night Dream, sparked a lifelong appreciation for the play­wright. He majored in English at Davidson College and wrote his honors thesis on the use of disguises in Shakespeare's plays.

When Fuller decided to pursue a master's degree in English, he chose the University of Chicago, in part because another influential Baylor teacher, Frank Lewis, had attended the school. After he graduated, Fuller stayed in Chicago to enter a doctorate program in per­formance studies at Northwestern University. While completing his Ph.D., Fuller taught English part-time at DePaul University and be­came associate director of the university's hon­ors program. Although he enjoyed teaching, Fuller was frustrated by the lack of outside-of-class contact with students. "That's what had meant so much to me at Baylor, and I felt that I wasn't having much influence," he said. "That's when I started looking at teaching in high school instead of college."

Baylor again played a role in Fuller's life; the search firm he used to secure a high school position after eight years of full-time teaching at DePaul was recommended by then Head­master Laird Davis, who also helped Fuller ap­preciate his strength as an applicant. When Montgomery Bell Academy (MBA), the boys' school in Nashville, posted an opening for a theater program director, Fuller was invited to interview. "The reason they pursued me," Fuller was later told, "was because I had gone to Baylor and I'd understand them." MBA's headmaster also liked that Fuller had run track at Baylor. It wasn't that he needed a track coach; it was that Fuller knew more than just drama. As Fuller looks back on that time, he thinks again of Jack Murrah. "When I finished my dissertation, the first person I sent it to was Jack. He taught me calculus, but he had degrees in English and the classics. I first heard the words of Flannery O'Connor in his math class and was blown away by the power of literature."

Fuller, who has now been at MBA for twelve years, teaches an introductory theater class, an advanced theater class, and two interdisciplin­ary classes on civil rights and the Vietnam War. He also directs two plays a year and supervises other directors in a department that presents six plays annually. Each year, Fuller's students enter the Tennessee Theatre Association's one-act competition and the state-wide Shakespeare monologue competition.

Fuller and his wife, Lauren, whom he met in Chicago, are the parents of Garrett, an MBA seventh grader, and Miles, a fourth grader at a Nashville public school. With Garrett now in the same grade that Fuller was when he entered Baylor, Fuller can see firsthand the confidence that great teachers can instill. "In seventh grade, a boy is afraid of embarrassing himself in front of his peers. If teachers can convince him to take chances and succeed, it makes all the difference."

Fuller appreciates that he is now in the posi­tion to do just that for his students, and they would probably not be surprised that the predic­tion for Fuller in his Baylor yearbook was that he would be the next Lucas Tanner, the beloved high school teacher in a 1970s television show who cares deeply about his students. "That was exactly what I hoped for because I wanted to be like the people I most admired." 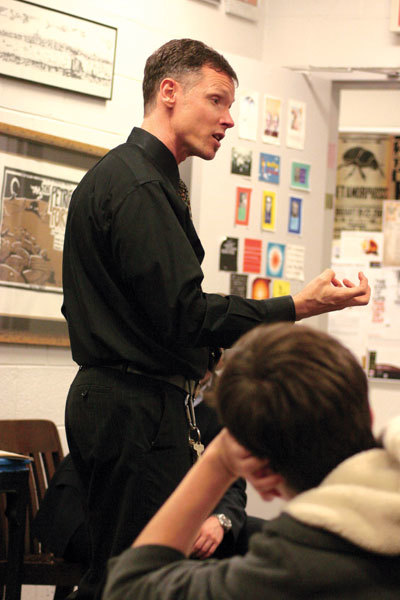