Finding a field that combines two of her defining interests and then doing what was necessary to be accepted into one of the finest programs in the country is consistent with Rachael's approach to life.

Rachael attends the University of Texas, Austin. In addition to her MFA, she will receive certification to teach kindergarten through 12th grade. She began studying theatre and education as an undergraduate at Brown University.

"I was interested in the arts, but I wasn't sure about theatre education until my senior year, when it all came together," she says. Rachael spent the summer at a professional theatre festival in Williamstown, Massachusetts. "I decided that summer that I couldn't be all that useful to the world as an actor," she says. "I wanted to find a way to combine my interest in the arts with a way to give back, and that's when I came to teaching."

Rachael traces to Baylor her desire to make a contribution because of the school's emphasis on giving back to society. She also credits Baylor's teachers and its "really solid" college counseling program with helping her to get into Brown, a school that accepts only 16 percent of its applicants.

One of four Baylor students accepted in 1998, Rachael's concentration at Brown was religious studies. "Joe Gawrys was just one of many excellent teachers I had at Baylor," she says. "Taking religious studies with him in high school sustained my interest into college and throughout my time there."

Rachael also cites her involvement in the Round Table, Baylor's literary group, as excellent preparation for college. "It really is like a college seminar, with a high level of critical analysis," she says.

At Brown, Rachael got involved in "a good bit of everything." In addition to "doing a ton of theater," she sang in an a cappella ensemble that performed at parties and had a memorable Christmas tour of Nantucket. "I just delved into what I loved," she says. "I studied Spanish and then tried Hebrew and Japanese."

Rachael's interest in Japan grew out of her exposure to Japanese culture in the religious studies class that had made such an impression at Baylor. After graduating from Brown, Rachael went to Japan with the Japan Exchange and Teaching program (JET). Paired with a Japanese teacher of English, she taught English as a Foreign Language to middle school students.

When she returned from Japan, Rachael taught for another year, in Princeton, N.J., at the regional McCarter Theater Center for the Performing Arts. As an education teaching artist intern, she taught after-school classes, in-school residencies, and workshops.

"The education department at this theatre was an excellent place to learn," she says. "I went there to find out whether I was truly interested in my career choice and also to get some experience." The internship helped Rachael get into the MFA program at Texas, where she was one of only five students accepted of the 30 who applied.

Rachael's love of drama started with her first Baylor Lower School play. She was then tapped for a role in an Upper School play in eighth grade and was permanently hooked. She was in a play every semester after, was active in the Chattanooga Theatre Centre, and took all the performance classes that Baylor offered.

One aspect of Baylor that Rachael still appreciates is having had to engage in physical activity. "I am not a very athletic person, and having to take sports taught me that exercise and health are important," she says. To fulfill the physical activity requirement, Rachael took dance, which she says has helped her as a performer.

"I am healthy now because of Baylor's emphasis on the importance of physical activity," she concludes. "It made me try things like Walkabout. And, like so much of what I learned at Baylor, it has stayed with me for life." 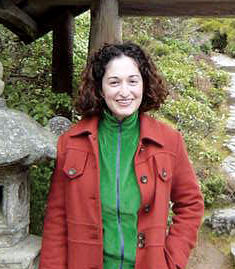