Menu
Morgan Jahnig '97: A Place in the Spotlight

Although he didn't make the cut for a musical performance scene in the 1994 Baylor production of "The Grapes of Wrath," Morgan Jahnig '97 (pictured above on bass) has found his place in the spotlight.

Since 2001, Jahnig has played the upright bass for Old Crow Medicine Show. The popular band has been described as "bluegrass revivalists," and in the words of the band's website, they perform "American roots music with a rock and roll attitude." Regardless of how their genre is categorized, they have definitely struck a chord in the world of country and bluegrass music.

"It was really almost happenstance that I ended up being a profes­sional musician," says Jahnig, who started playing bass at Baylor. "I played tenor sax with Chris Booth '97, and I was playing electric bass for the pep band. Then Tom Schow bought an upright and said he needed someone to play. I took a few lessons but picked most of it up on my own." Jahnig, Booth, and Joe Johnson '97 also put together a band for the annual student concert event, R.A.G.T.A.I.L.S. "Our band was called 'Cushion,' and we were pretty awful."

Jahnig's family moved to Atlanta at the end of his junior year, and after graduating from Westminster in 1997, he enrolled at New York University (NYU) to study music technology. Two years later he returned to Tennessee, and a random occurrence on a street corner changed his career path. Jahnig, en route to dinner with his father, was drawn to a group of street musicians, and "I watched them for so long that my dad finally dragged me away because he was starving," says Jahnig.

The group, of course, was Old Crow, and Jahnig was hooked. "At one point I sent them an e-mail and evidently told them I played bass. About a year later they called me and said they were returning to Nashville and had just lost their bass player. They were kind of hard up and were still playing on street corners at the time."

But that soon changed. In the winter of 2001 they made their debut on the Grand Ole Opry stage for the 75th anniversary of the Opry. They played one song, received a standing ovation – the only one of the night – and were asked to play an encore. "It was a huge tipping point for the group," says Jahnig. Shortly afterwards, Old Crow signed with a powerhouse booking agent, and in May, 2001, they were opening shows for the Del McCoury Band and Dolly Parton and, later, touring with Merle Haggard.

"In the early days of Old Crow, amazing things would happen to us. We met Doc Watson; we met Marty Stuart. We would literally go from a room with 75 people to a festival with 7,000 people, but the next day we were going back to 75 people. Every time we went back to a big event, it was like looking into someone else's house, then going back to yours. But we were never trying to be in that house; we were just doing it. We were just playing music and seeing where it would go."

The band has since performed at most of the major music fes­tivals in North America, including Bonnaroo, JazzFest, Telluride, and Coachella in Los Angeles. They've toured internationally, been featured on "Austin City Limits," the BBC's "Later with Jools Hol­land," and NPR's "Prairie Home Companion," and they had two songs on the soundtrack for the 2005 Academy Award-nominated film TransAmerica. They opened for the Dave Matthews Band in 2009.

"People ask us what we did to get where we are today, and I still can't answer that question. I can't believe how far we've come since we started. It's about meeting the right people and having the right people being into you, but it's also having the drive and being will­ing to stick with it through all the bad times. And maybe talent has something to do with it." 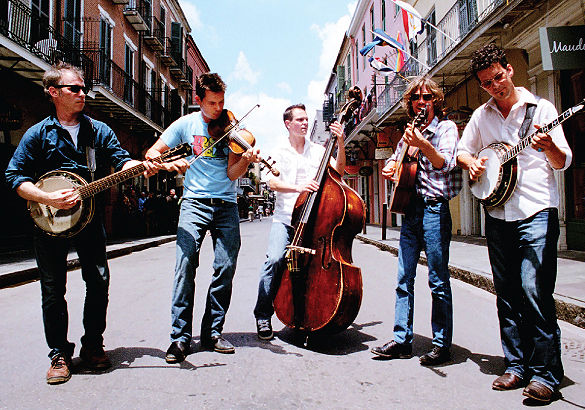