What happens when you dream of working for Disney and end up with George Lucas? A whole lot of Industrial Light & Magic, that's what! And, of course, the chance to be part of a little movie-making history.

This is exactly what happened to Jamy Wheless, a designer and animator who recently worked on the digital characters of Yoda and Dexter Jettster for the Star Wars film episode, Attack of the Clones.

"I walked around giddy for the first few months," smiles Jamy, who began his career as an illustrator before getting interested in animation.

In fact, it was the acceptance of his short independent film Avery into the prestigious Siggraph festival that ultimately led him to a position at Industrial Light & Magic (ILM) in 1996. In October 2000, after working on a string of national commercials, including spots for Pepsi, Toyota, Pillsbury, Chevy and the movie Small Soldiers, Jamy joined ILM's feature production team to work on the animation for Star Wars Episode I: The Phantom Menace. A year later, he found himself working under acclaimed animation director Rob Coleman as lead animator for Yoda and Dexter.

"I can't stress enough what a huge team effort creating a digital character is," Jamy says. "The only way to complete it successfully is if everybody works together. One person builds a model of the character, another creates the face, and another inputs the information into the computer to create a rough digital character -- then we work together to add key poses, expressions and detail -- we're constantly refining every nuance; for example, Yoda's ears used to jiggle because Frank Oz would get so tired of holding the heavy puppet. Those kinds of details are part of the character -- audiences will notice if you overlook them."

According to Jamy, there's a very direct link between his present work and his Baylor experience. "It's definitely my teachers," he states. "They all believed in me, and they all saw something in me even when I didn't see it in myself." 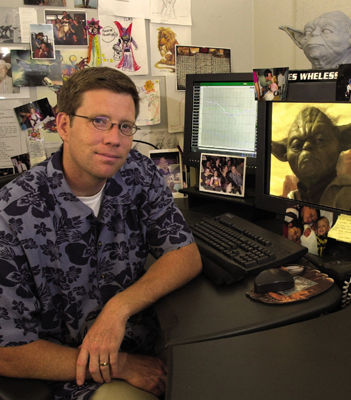