"Baylor had instilled the notion that I could do all the things on my to-do list."

Jacob Young '74 worked on the yearbook and The Notes at Baylor, and later was editor-in-chief of The Stanford Daily, but journalism didn't always figure into his career plans. "I became an editor because I forgot to take the LSAT," joked Young.

"Law was a default degree if you were studying humanities — unless you were passionate about teaching." It was only when he was almost ready to graduate from Stanford with a degree in history that Young realized he wanted to pursue journalism. "But I didn't want to work at newspapers — the daily grind was too much. I decided I wanted to be a magazine journalist, and I needed to move to New York." A few days after graduation, Young moved to Brooklyn and worked as a reporter at a restaurant trade magazine.

Within a year, Young became a fact checker at Newsweek, a job he held for 18 months before he became a correspondent for the magazine's Detroit bureau. "I was covering Michigan, Ohio, and Western Pennsylvania — the Rust Belt — from 1981 to 1983 in one of the first big downturns in heavy industrial America, right at the beginning of the flight to Sun Belt," explained Young. "It was a sad story to be covering, but it was fascinating."

After three years in Detroit, Young was transferred back to New York as a writer for Newsweek International. Young's stories, a number of which were cover stories, ran the gamut from politics to economics to culture.

Young marvels when he compares who he was before Baylor with where life has taken him since. "Baylor propelled me out into the world. I had a superstar group of teachers in Bruce High, Bill Cushman '59, and Jack Murrah. They cared about words, ideas, and their students," said Young. "I felt so fortunate to be exposed to them and, through them, to what the wider world could be like."

Young remembers that Alan Murray '73, now deputy managing editor and executive editor, online, for The Wall Street Journal, was set to attend Stanford until he was awarded UNC's Morehead Scholarship. "Then Alan said, 'You need to go to Stanford.' He brought me his catalog and recruiting materials, and I knew I had to go there. I'm grateful to him for not going to Stanford." What might surprise people in these days of multiple college visits is that Young had never been on the Stanford campus until the first day of his freshman year. His flight to California was only his second time on an airplane and the first time he had ever been west of the Mississippi. "But I felt very prepared, very confident that things were going to work out. Baylor had instilled the notion that I could do all the things on my to-do list."

By 1988 Young had been at Newsweek for ten years, and he was wooed by Time, Inc. to become senior editor of People magazine. In 1990, he became editor-in-chief of the Australian version of the magazine, Who Weekly, based in Sydney. Over the next ten years, still under the banner of Time, Inc., Young served as editor of Time South Pacific, returned to People as assistant managing editor of the news section, was launch editor of People en Español, and helped launch Teen People. As development editor of Time, Inc., Young worked on prototypes and launches of magazines in Brazil, Japan, Australia, the United Kingdom, and Germany.

Young was with Time, Inc. until 2000 when he accepted the position of executive editor at Reader's Digest, where he worked until 2005.

And in the midst of all that traveling, editing, and launching, Young met his wife, Marsha Robertson. While in Los Angeles to recruit an editor for People en Español, Young was introduced to Marsha through a mutual friend. The two discovered that they had gone to Stanford at the same time, although neither remembered ever seeing the other.

The couple now lives in the San Francisco Bay Area, where Marsha grew up. Young is the managing editor of Wired magazine, a position he has held since 2006. "I have been fortunate to have worked at four terrific magazines with very different missions and very different readerships. Wired covers a lot of ground. It's not about upgrading your computer motherboard. It's about business, technology, new companies, culture, and even crime stories."
Young is enjoying his first stint as a managing editor. "Something mind-blowing comes across my desk every day. It never gets old. There's a breakthrough in science, technology, or business every day, sometimes two or three times a day. I find it endlessly fascinating," he said from his office, which is located around the corner from Flickr and down the street from Twitter.

As far as he has traveled, Young still keeps tabs on Baylor. "When I look at where Baylor is now, it's obvious the school has continued to grow and thrive. My senior year was the first time that African-American students came to Baylor. And of course, no women. Now I see students of color and students from all over the world and read not just about academics and sports but about all the other great programs as well. It makes me very proud to have gone there." 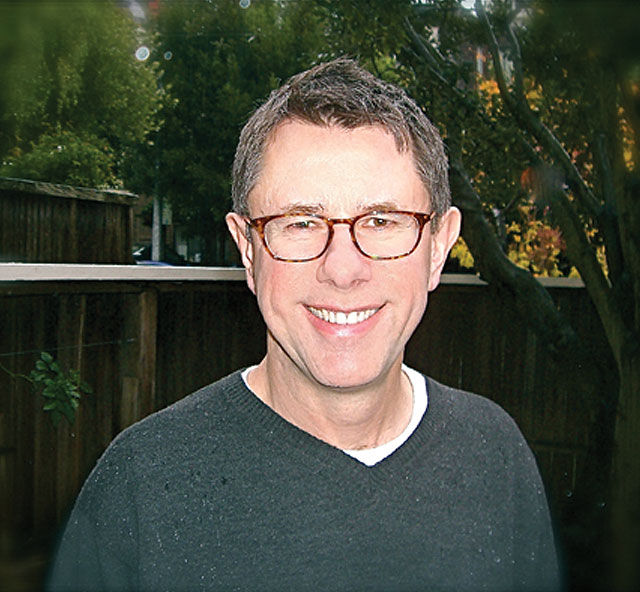