As a member of the lighting crew for major rock and pop concerts for the last decade, Christopher Keene '97 has a unique perspective on the complexity of staging a mega-million dollar concert production.

His latest job, for example, has been with the U2 360° Tour – so named because of the immense, claw-like stage (shown above) that allows fans a 360° view of U2 during the concert. The set is so huge that it takes four days to build, requires 172 trucks to transport hun­dreds of tons of equipment (17 are just for the lighting), and 156 tech crew members to put all of the pieces together. It's at the top of this 150-foot structure where you will find Keene, who locks the lights into position as they are hoisted up to him by crane.

Keene's climb to the top of one of the world's most elaborate sets began simply enough. Because his father was a business agent for the local stage union, Keene was able to spend his youth soaking up the backstage bustle of performances at Chattanooga's Tivoli Theatre, Memorial Auditorium, and the annual Riverbend Festival. At Baylor, he was involved in tech crew and lighting for the Baylor Players.

After high school he began working for Bandit Lights, Inc. in Knoxville and eventually worked his way up to big-name tours, nota­bly Crosby, Stills and Nash, former Van Halen band members Sammy Hagar and David Lee Roth, and Jon Bon Jovi. Keene eventually left Bandit Lights, changed his home base to Nashville and started work­ing on a freelance basis for a steady stream of shows. "Incubus was fun, and Radiohead was also a pretty good tour. I was doing Van Halen when I was asked to do the Rolling Stones in 2004, and I thought, yeah, that sounds like a good idea. After the Stones, I did two Beyoncé tours before joining U2."

Although he hasn't kept track of every stop along the way, his passport reads like a travel adventure novel rich with characters and memories. "I've been to China, New Zealand, Japan, Austra­lia, South America, Europe, Canada, and Russia. I've never been to Korea though," he says, citing the 2006 accident of Keith Richards, who suffered a head injury after falling out of a tree in Fiji and the subsequent cancellation of the Rolling Stones' Asian tour.

After ten years on the road, including seven months with the U2 360° Tour, Keene is now staging his personal version of a 360-degree turn. In January, he began working for the Chattanooga-based com­pany Creative Business Solutions and in May, he married Elizabeth Moore '98. He hit the road again with U2 in June, but when the lights come down at the conclusion of the group's tour in Coimbra, Por­tugal, this October, Keene will leave touring for good and return to Chattanooga to enjoy a less-frenetic lifestyle.

"I've enjoyed my time touring and going to places I've never been to before. But, you miss out on other things while you're on tour. As cool as it is, you miss having dinners with people or having a beer with your buddies. If I did this for the rest of my life, it would limit me. I don't want to miss playing golf with my dad, and I don't want to Skype with my kids from the road. It will definitely be bittersweet, but it's time."

To see the U-2 show come together from load in to the last truck out, go here: http://blog.livedesignonline.com/U2-360-Tour/ 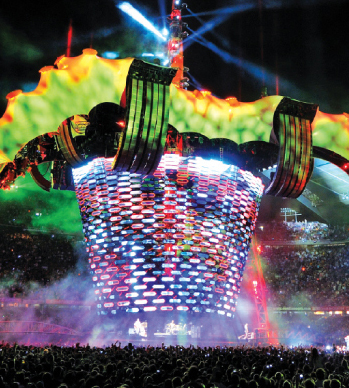