Having performed with Opryland Productions eight years, Brandon Stansell '05 was already acquainted with the stage and well on his way to fulfilling a lifelong dream to be an entertainer when he was selected as a backup dancer for Taylor Swift's Fearless Tour.

When he was a freshman at Belmont University, Stansell was a singer and dancer for the "Veggie Tales" Rockin' Tour Live and the Very Veggie Christmas Tour. After juggling rehearsal schedules and performances throughout the U.S., he decided to take a break and focus exclusively on school. It wasn't until last spring that he decided to accept a job that would put him back on the road. It just so hap­pens that this particular job was with the hottest concert tour of the year featuring country-pop music's top young artist.

"I was working late one night on a recording project at RCA Studio B on Music Row when a friend of mine told me she was auditioning that next morning to be a dancer for the Taylor Swift Fearless Tour," says Stansell. "She told me there was going to be a ballroom element to the audition process and asked if I would be her partner – simply as a favor. The next day we waited with hundreds of other applicants to go through what would be a three-day audition process. At the end of the audition, I was hired along with five other dancers to be a part of Taylor's first headlining tour."

What has followed is a whirlwind life of traveling to almost ev­ery major U.S. city and performing to sold-out crowds of more than 15,000 fans each night in venues that have included the Staples Centre in Los Angeles, Mandalay Bay in Las Vegas, and Madison Square Garden in New York City – which sold out in one minute. "Every night I go to sleep on the tour bus in one city and wake up in a com­pletely different place. One of the highlights has been meeting new people. Everyone involved with this production has such an extensive resume, and yet they still recognize the importance of treating others well. I have been welcomed into a family on this tour, and it is one I am honored to be part of. Taylor is such a talented musician and is well deserving of her superstar status."

In spite of an incredibly hectic schedule, Stansell was able to keep up with his coursework and graduated from Belmont in December with a degree in music management. He was soon on the road again, however, as part of Swift's international 2010 Fearless Tour.

Even from a distance, Baylor continues to be a part of his amazing journey. "I had an interview last week for the DVD portion of the re-released Platinum Edition "Fearless" album, and when I was finished, the interviewer turned to everyone else in the room and said, 'You guys take a lesson...that's how it's done.' I was immediately transported back to Baylor when I was in Mrs. Haynie's class giving a persuasive speech and in Mr. Stover's class reciting Robert Frost's Birches. I have always been very comfortable speaking in front of people, but they are the ones who taught me how to do it well." Stansell also recalls encouraging words from Joe Gawrys and a colorful warning from Bill Cushman '59. "Mr. Cushman told me if I were once again late to his class, he would 'suspend my ass from the ceiling.' Oddly enough even this comment has had an impact on my professional career. But I never had to pay Mr. Cushman for being late." 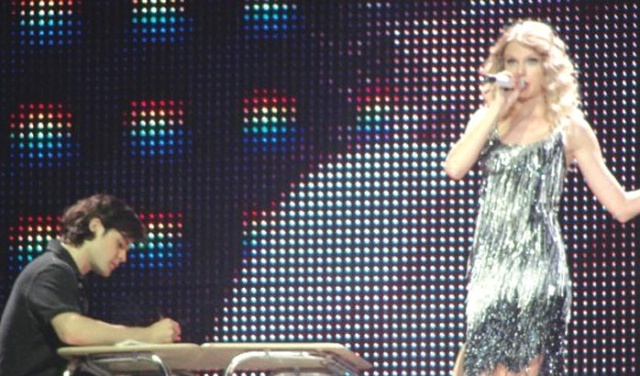