After a distinguished career in the intelligence community, Bill Duff watched with fascination as the Soviet Union crumbled and sensed there was a story that should be told. Several years and 95,000 words later, A Time for Spies was published by Vanderbilt University Press. In it, Bill meticulously chronicles the life and career of Theodore Stephanovich Mally, a Hungarian native who became chief of Soviet espionage in London during the mid 1930's.

Bill's wealth of experience makes him an ideal author for this topic. After graduating from Baylor, Bill completed his B.A. in political science and history at the University of the South. He served two tours of military duty assigned to intelligence and military police. While working closely with Special Agents of the Federal Bureau of Investigation, he was encouraged to apply to the Bureau upon his discharge.

He entered service in the FBI in 1952. After a variety of assignments, he settled into a specialty of counterintelligence and espionage. Bill also honed his research and writing skills by preparing detailed counterintelligence summaries and analyses. He forged invaluable contacts in the academic community among those specializing in Soviet bloc studies. "I had a very rewarding career featuring experiences I would not trade for anything," Bill recounts. "I trust I was able to make a contribution to our country's effort during the Cold War."

Upon his retirement in 1977, Bill authored numerous articles published in scholarly journals. His lifelong interest in the history of counterintelligence led him to acquire a fine collection of research material. After attending a 1991 University of Toronto conference with a theme "The Lessons of the Cold War Should Not Be Allowed to Die," Bill decided to research the life of Theodore Mally, convinced such a biography would contribute to this field of study.

Bill embarked upon five years of meticulous research involving great amounts of correspondence with international archivists and Oleg Tsarev, the official historian of the Russian Foreign Intelligence Service. Bill made multiple trips to Vienna, London, and Moscow and spent countless hours in libraries, archives, and government offices in search of information.

Since its publication, his book has received critical acclaim and notable praise in both academe and the intelligence community. Not one to rest on his scholarly laurels, Bill is conducting research and compiling information for another book. 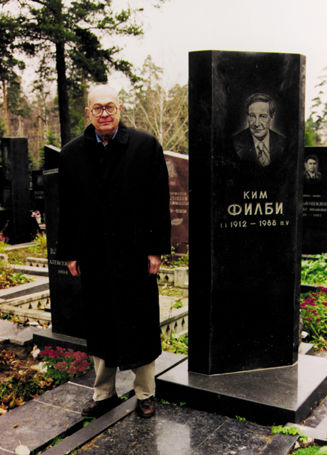