[Before Baylor] I had never had to work that hard. Knowing how has come in handy.
For one of her Baylor yearbook quotes, Veena Rangaswami '00 chose, "Do or do not. There is no try," spoken by Jedi Master Yoda in "The Empire Strikes Back." The quote is telling for two reasons. It reveals Rangaswami's inner nerd, which she blames her brother Vikram for cultivating, and more importantly, Yoda's philosophy summarizes Rangaswami's own approach to the world. "In just a few words, it [the quote] says so much. If you want to do something, go and do it instead of sitting and thinking and wondering about what's going to happen. It's something I try to follow, but it's hard. I actually still always write that quote in the front of all my notebooks."

For almost four years, Rangaswami and her notebooks have lived far from her Arkansas home — in Bangalore, India, where she is the program manager of Peace Child India (www.peacechildindia.org), an organization that has been working with young people from disadvantaged communities since 2001.

"One of the main reasons I got interested in working abroad was my experience in Jamaica [on the spring break community service trip] my senior year," said Rangaswami. "It led me to think about what I wanted to do with my life. I may have ended up as a teacher if I hadn't found my interest in international service, but I can't just say I'm a teacher at Peace Child India; it doesn't encompass everything that goes on here. I'm also a social worker, a tour guide, and a supervisor."

Rangaswami's path from an Indian home in Arkansas to living in India near where her father was raised took her through two cities in Tennessee. A native of Memphis, she was a high school sophomore in Helena, Ark., when her brother enrolled at Emory University. When Vikram discovered that his classmates were better prepared for college than he was, he encouraged Rangaswami to consider Baylor, where a friend from Helena, Peyton Biederman '97, had boarded.

"Baylor felt great right away," said Rangaswami, who got involved with community service as soon as she enrolled in Baylor as a junior. While service was not new to her — she had done some volunteering in Arkansas — she had never committed to daily involvement, and she blossomed in the program. "I tutored at the girls' and boys' homes at the Tubman Center." She worked closely with community service director Joli Anderson and became a site leader during the fall of her senior year.

Rangaswami discovered other new interests at Baylor as well. She volunteered as track manager for Coach [Bill] McMahan '67 and enjoyed the commitment. "I took a class from Bill Cushman '59 my senior year, and he is the reason I majored in history at Rhodes. He really encouraged me to follow my love of history and taught me that it would eventually lead me to success." said Rangaswami. "Jim Stover really helped in senior year AP English class, encouraging me to be a better critical thinker and teaching me how to bring that into my writing. And Takisha Thomas [Haynie], my eleventh grade English teacher and adviser senior year, pushed me to be a better writer and to remember that academics are not the be-all and end-all. She reminded me to give my attention to other things that interested me."

Nancy Johnson, who was in charge of student activities, helped Rangaswami heed that advice by getting her involved with the student activities team that planned weekend diversions for boarders. In her senior year Rangaswami was also on the Student Council, was a member of the Honor Society, was a member of the MLK Day planning committee, and continued as track manager.

When Rangaswami graduated from Baylor, she chose Rhodes College in part for its strong academics and in part for its strong commitment to the Memphis community. "Newsweek made a list of the top 20 do-gooder colleges in the U.S., and Rhodes was number one," said Rangaswami with pride. "A lot of why that means so much to me was that I grew up in a poor region in the U.S., and both my parents were doctors. But Baylor gave me the opportunity to explore that further and to see where my interests lay."

After her initial service trip to Jamaica with Baylor, Rangaswami accompanied Anderson on six more visits there. She also worked every summer during her years in Memphis at Youth Villages, and she was a nanny for a year after graduating while deciding what to do next. After a six-month stint as a volunteer for Peace Child India in 2005, which she chose because of a familiarity with India from family trips there, Rangaswami returned to the U.S. and was a head cashier at a Barnes & Noble bookstore. After completing her TEFL certification in Kolkata to teach English as a foreign language, she was hired by Peace Child India to recruit volunteers and has been there since.

This fall, Rangaswami will write her favorite Yoda quote in a new notebook as she begins a master's degree program at the Clinton School of Public Service in Little Rock, Ark. She has loved working for Peace Child India and now welcomes the chance to take what she has learned and to go further with it. "My goal is to work for UNICEF, the Gates Foundation, or the Clinton Foundation."

Rangaswami, who was in Chattanooga last fall for her 10-year Baylor reunion, says that Chattanooga still feels like home. "I grew a lot there. I learned what my strengths were." She credits Baylor with expanding her world view — "I got to know people from so many different countries, people who had grown up in different cultures and societies" — and with teaching her self-discipline. "I had never had to work that hard before. Knowing how has come in handy." 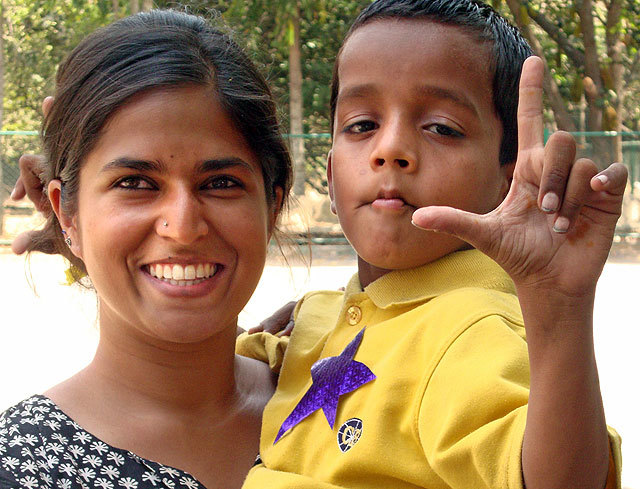