Tom Jolly was in one of the hottest of the hot seats on Election Night 2000. As part of the team that oversees the front page of the venerable New York Times, Tom worked into the wee hours in an effort to report the outcome of a presidential election that was too close to call.

The former Baylor Notes staffer has been at The New York Times since 1993, mostly as a sports editor. He moved to the news desk -- just in time for Bush vs. Gore. "I'm part of the team that oversees the front page, as well as production of the rest of the paper," Tom says. "This was to be my first experience covering an election of such magnitude, so I was looking forward to it. My anticipation grew when we made plans to publish an Extra edition, something the Times hadn't done since the 1960 presidential election, when Kennedy narrowly defeated Nixon. I was told to come in late and be prepared to stay till dawn if that's what it took to publish a paper that declared the name of the 43rd president."

Tom continues, "We print about 1.4 million papers a night and in order to get that job done and get those papers delivered in time, we have to start on schedule, with the news we have. On election night, our first edition featured pictures of both candidates beneath a six-column headline that read: "Bush and Gore in Extremely Close Race." It might have been the best headline of the night."

It went on to be the closest presidential race in history – with "dimpled chads," recounts, Supreme Court decisions, and an ultimate victory for Bush to follow. "Certainly, few dreamed that the election would drag on unresolved for five weeks, or that its decisive moment would come in the Supreme Court." 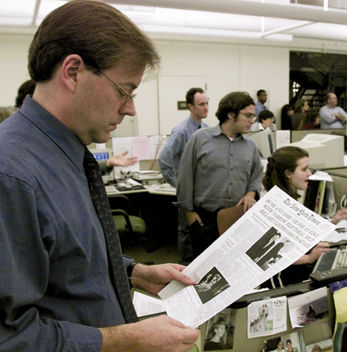