"College is just the training ground for a profession. You've got to get your education before you get to college, and Baylor certainly did that for me."

Randy Davis '74 was fortunate to have parents who gave him the gift of roots and wings; his mother insisted that he enroll at Baylor, and his father pushed him to see the world. Following their edicts shaped the life Davis leads today on the Island of Borneo.

Davis's story begins in North Chattanoo­ga, where his parents owned the plumbing business that Davis was expected to run one day. Although the family had a history with Central High — Davis's father, Arnold, had played football for Coach Red Etter during the school's glory days — Davis's mother, Yvonne, believed in the benefits of an independent school. Davis thrived at Baylor, where sports were a big part of his life. He wrestled and he played baseball. He was on the 1973 football team that won state and national champion­ships under Coach Etter, who had also trans­ferred from public school to Baylor.

When it came time to choose a college, Da­vis's father said he would only pay the tuition if Davis picked a school in another region. Davis's mother loved to travel, and his father had toured the U.S. and Central America in his first career as a professional baseball play­er (where, by coincidence, he had played for a short time with Baylor coach — and Red Etter's son — Gene Etter). "My father said, 'If you don't see other parts of the country, you won't know anything but the South."

After a year at Arizona State University in Tempe, Davis decided to pursue diving, which he had discovered at 15. (He founded Baylor's first Scuba Club.) He left Arizona State to enroll in the nation's first two-year associate's degree program in underwa­ter technology at the Florida Institute of Technology. His always-supportive parents encouraged him even if it meant that he'd never run the family plumbing business.

After he earned his associate's degree, Davis pursued both the commercial and sport sides of diving. He worked underwater for diving companies that did work for off -shore oil companies, on platforms, rigs, and salvage in the Gulf of Mexico and in South America. In the off-season, he taught diving, led Scuba tours, and earned his Master In­structor rating. His love of travel and pur­suit of diving jobs led him to Asia, where he took a contract in the Sultanate of Brunei on Borneo. He also worked in Malaysia, Indo­nesia, Thailand and the Philippines. He then settled back in Borneo in Kota Kinabalu, the capital of the Malaysian State of Sabah.

Davis would love to host a Baylor Walk­about trip in Borneo that includes diving. According to Davis, his class took Baylor's first-ever Senior Trip, which evolved into to­day's Walkabout program. "The Senior Trip with [then headmaster] Herb Barks, Jr. '51 be­gan to expand people's horizons just as my parents were doing; to let us know that there were other things out there."

Davis, who says that he remembers all of his teachers, thanks Roy Ashley whenever he writes reports and correspondence and Col. W. W. Watson for his math skills. "I got through physiology in diving training be­cause of Major [Luke] Worsham and biology. And I owe my love of history, including shipwreck diving, to "Ancient" Stan Lewis, who made history come alive." Although he is probably not telling the whole story, Davis traces the origin of his nickname, "Crazy," to his work as a stuntman in "The Great Es­cape," produced in a filmmaking class taught by another favorite teacher, Bill Cushman '59.

"You don't realize it until you get out. College is just a training ground for a pro­fession. You've got to get your education be­fore you get to college, and Baylor certainly did that for me."

Davis and his wife, Stephanie, a native of one of North Borneo's indigenous tribes, the Kadazan, have two daughters, Samantha, 18, a freshman at UTC, and Cassandra, 15.

Davis attends an annual diving conven­tion in New Orleans and tries to visit Chattanooga and Baylor during these trips. "Bay­lor today is almost unrecognizable, but the changes are all for the good," said Davis who approves of the shift to coeducation and the school's emphasis on liberal and fine arts.

Asked what he might tell students inter­ested in overseas careers, Davis says that his advice, applicable to all students, would be the same as the advice his parents gave him. "You have to get out from where you are to see other people's viewpoints. One of the reasons I went overseas to dive is because I didn't want to meet the same people with the same attitudes and the same prejudices. You may not always agree with them, but you have to see how other people live." (And you never know who you might run into in your travels. It wasn't until he was searching the Baylor website that Davis realized that Johnny Johnson '57, for whom Davis once worked in the U.S. and Asia,was a Baylor alum.)

"Baylor gave us education, discipline (even after it was military), self-respect, and respect for others. Baylor taught you about life and gave you the preparation to go out into it." 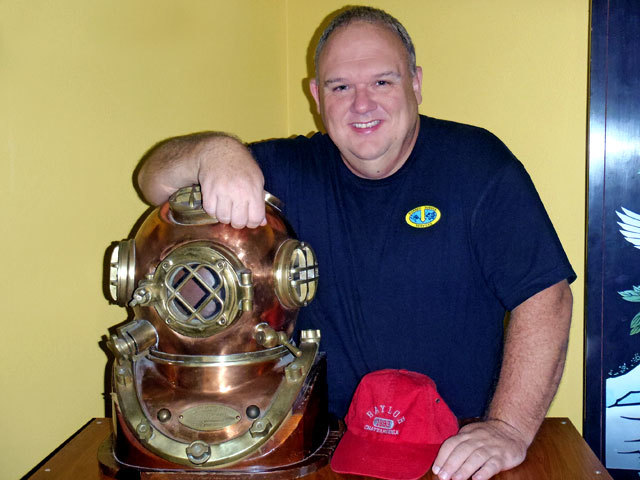