When Owen Roberts '03 was interviewed for this article, he had just returned from Haiti, and it's a safe bet that he'll soon be packing for another adventure. As an engineer for the National Renewable Energy Laboratory (NREL), Roberts analyzes wind resources, economic feasibility, and carbon savings for the Department of Defense, Department of Interior, the Environmental Protection Agency, and the Bureau of Land Management, among others.

One of Roberts's current projects, for example, involves the installation of three wind turbines for the largest National Science Foundation (NSF) base, the Ross Island Wind Farm, in Antarctica. Roberts is on the team that is commissioning and testing the wind turbine and electrical system that will be used there — one that stores energy in a way that will result in significant fuel savings. Roberts's team will be seeking answers to the questions: Will there be enough wind? What turbine will survive there? Can it be built? How do you integrate different energy and power sources? "The project in Haiti is still going, there is another Antarctica project, and there are projects at the South Pole and in Greenland," said Roberts. "There's also stuff going on around Alaska, but that's boring," he jokes.

Roberts, the son of Larry Roberts '65, longtime Baylor teacher (and now the school's sustainability coordinator), and brother of Mary Louise Roberts '99 grew up on Signal Mountain. He was an All-American swimmer at Baylor until he switched to crew and Walkabout after his sophomore year.

But Roberts's main interest was always in how things worked. "I remember Dr. Taylor's [George Taylor '54] class. He taught physics in the way that Newton had to learn it. Math is usually taught by giving students the tools that describe the natural phenomena. It was nice to have a class that wasn't focused on the rules but on explaining the natural phenomena," said Roberts. "And Lewis Rush made math so much more interesting and fun than just teaching it out of a book. Joe Gawrys was a great person and a great teacher. I wasn't particularly interested in Eastern religions, but he certainly made it something I got more out of than I expected to."

Roberts recalls his AP Physics class with Dr. Scott Dering. "My buddies, who were all gearheads, and I would explain things a different way. Anybody who remembers me remembers that I bounced off the walls with ADHD. I didn't like taking my meds, which was probably a detriment to my academic career." While that may have been the case, Roberts says having a unique perspective is consistent with ADHD, and learning to use it productively is an advantage. "The best thing I ever learned how to do was to find a group of friends doing something similar. I wouldn't have made it through high school or college without friends, and I do well when the curriculum is focused on projects."

Roberts and Ben Mies '03, now a Baylor math and Walkabout instructor and wrestling coach, met in third grade and went through Baylor, as well as undergraduate and graduate school together. The two friends shared an interest in cars, and as undergraduates at Worcester Polytechnic Institute (WPI) in Worcester Mass., they worked together to design, build, and enter a car in the Society of Automotive Engineers competition. "We found funding, found sponsors, and got support from the mechanical engineering department to use their facilities." At the race in Rochester, N.Y., they won Rookie of the Year — and the program they inaugurated still exists at WPI. "But I also failed three math classes at WPI," said Roberts, who doesn't miss many opportunities to be candid. "And I learned a lot more from my failures."

Roberts's interest in the work he now does with renewable energy came about in part from the need to satisfy his humanities requirements for WPI. During his college summers, he worked on farms in Tennessee and Colorado, and his capstone project grew out of reading he had done about sustainable farming and conservation.

His summer work also allowed him to graduate from WPI in just four and half years with both a bachelor's and a master's degree in mechanical engineering. In late 2008 Roberts accepted a job with Tennessee Valley Infrastructure Group. The company sent him to Big Springs, Texas, to serve as construction manager and field engineer for the construction of 172 1.5-megawatt wind turbines.

After the job in West Texas was completed, he worked on smaller projects in the U.S., Nicaragua, and the Caribbean, but when the economy changed, Roberts could see that there would be fewer opportunities for him in private industry. In 2009, he moved to Boulder, Colo., to take the job he now holds with NREL.

Roberts laughs when asked if this is the kind of work he thought he'd be doing. "Not at all; I have no idea how I got here. My dream had always been to race cars or motorcycles, and I actually had a paying job building and racing cars while in grad school. But I didn't find the right group of people to do it with. I think I chose a career path where I could use my engineering background. One thing led to another, and I've been pretty darn lucky."

Roberts also thinks Baylor had something to do with the quick success he has had in his engineering career. "People, especially in the government sector, are not used to young engineers speaking up. Baylor definitely taught me to give my perspective. At Baylor I also learned how to write, to communicate, to share ideas. That is something that engineers are inherently bad at, and it is a huge advantage for me. The best idea in the world is useless if it's stuck in your head." 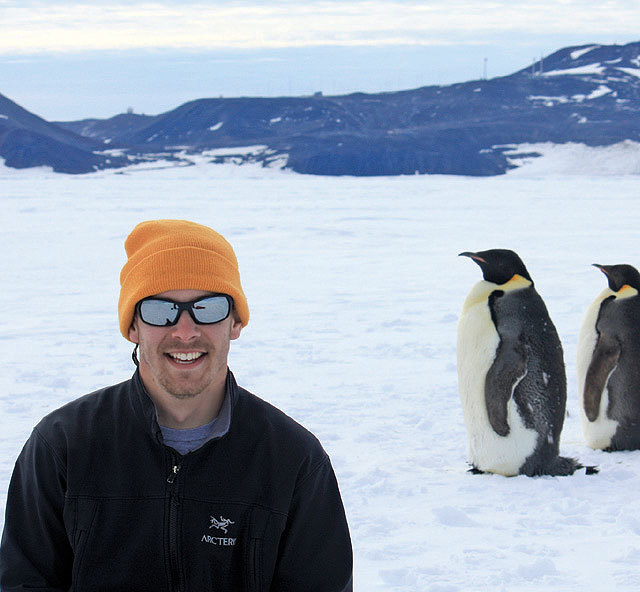