When Nate Rawlings entered Princeton Univer­sity, he had no intention of joining the Army. But he came to think of military service as a good bridge between college and graduate school and signed up for ROTC, earning a scholarship that eased the financial burden for his parents, Baylor head librarian Milly Rawlings and Peter Rawlings '71. After the Sep­tember 11, 2001, attack, Rawlings realized just how important service was. "If I didn't do it, someone else was going to have to," Nate reasoned.

On the day he graduated, Nate was commissioned a Combat En­gineer lieutenant in the Army and headed to Fort Leonard Wood in Missouri. Already a natural leader — he served as captain of both the football and wrestling teams at Baylor as well as Honor Council President — Rawlings was sent to the Sapper Leader Course, where he learned advanced demolitions, small unit tactics, and advanced infantry skills.

In May 2005, Rawlings joined the 4th Infantry Division at Fort Hood in Texas. On his first tour of duty in Iraq, which began that December, Rawlings led a Bradley fighting vehicle platoon, conduct­ing cavalry reconnaissance missions. "We patrolled the main highway leading into Baghdad airport, the main supply route," said Rawlings. "We patrolled for six months, hunting insurgents who were planting roadside bombs and insurgents who were attacking supply convoys." For the second six months of his first tour, Rawlings's charge went from seeking insurgents to searching for bombs throughout Baghdad using specialized equipment.

During this time, Rawlings received an e-mail from one of his for­mer Princeton English professors and renowned writer John McPhee. One of McPhee's former students, Whitney Terrell, was writing a novel based in Iraq and wanted to embed with a unit there. Rawlings helped with the arrangements, and a piece that Terrell wrote about his two-week stay with Rawlings's company ran in the Washington Post Sunday Magazine.

Rawlings returned to Fort Hood in December 2006 to refit the unit and train new leaders; he was promoted to captain in July 2007. On his second tour, which began in March 2008, Terrell visited Rawlings in Texas, this time along with an NPR producer, and a segment on Rawlings's unit was aired on "Day-to-Day." Impressed with Rawl­ings's perspective on combat, the NPR producer left Rawlings with radio equipment on which he could record material for future NPR broadcasts. When adding radio equipment to his combat gear proved to be impractical, Rawlings began submitting written dispatches and was interviewed by phone every five to six weeks; his reports are archived at www.npr.org/nate.

Rawlings, who received two Bronze Stars and an Army Com­mendation Medal and the Combat Action Badge during his service, resigned from active duty in October 2009. He now serves as an intel­ligence officer with an Army Reserve unit on Long Island, N.Y. and is enrolled in a one-year master's program at Columbia University's prestigious School of Journalism. He is currently applying for a sec­ond master's program in either public policy or public administration. "The second master's opens up a host of options," said Rawlings, who can see himself as a staffer for a congressman or mayor, working in the White House, or combining politics and journalism in the style of George Stephanopoulos or Tony Snow.

Rawlings and McCallie's Penn Garvich were honored at halftime of the Baylor-McCallie football game on October 2 for their service. "We were there to represent other vets who were still serving," said Rawlings, who is quick to add that classmates Matt Johnson or James Scott could just as easily been selected. "I hope people thank James and Matt for all they've done." 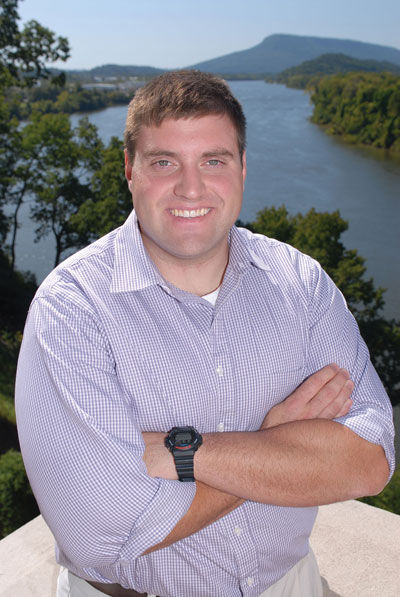