"I had such a strong foundation at Baylor that college was almost easier than high school."

Although Lorri Eberle grew up in a family of hik­ers and campers, it was her time as a kayaker at Baylor that led her to her current career. "At Baylor, I got into kayaking through Walk­about. That is what really sparked my interest in rivers, to be on them, to work on them, and ultimately to conserve and protect them."

Eberle, now Columbia Riverkeeper's water quality coordinator, holds a B.A. in environ­mental studies from the University of North Carolina, Chapel Hill. Eberle had taken a number of biology and chemistry courses at Baylor, and "if environmental science had been offered then, I would have jumped at the opportunity," said Eberle. She took ad­vanced chemistry and AP chemistry from Pete Melcher. "He pushed students; giving up was not an option. Bill Tatum's biology classes were also great. I had such a strong foundation from Baylor that college was al­most easier than high school."

When she graduated from UNC, Eberle secured a job at Exploring New Horizons in Northern California. "It was probably the best job I'll ever have. I got to play in the redwoods with fifth graders and teach them about the water cycle and photosynthesis."

Eberle knew she would eventually leave New Horizons for graduate school to pursue her love of field biology, and when she felt ready to do so, she went about it strategically, identifying a professor at the University of Montana whose work interested her. Through him, she signed on for six months in Russia assisting a graduate student who was work­ing on a salmon river in Russia's Kamchatka Peninsula. Eberle was accepted into the mas­ter's program on her return, and the following year, she returned to Russia for six months, this time to further her own research.

Eberle lived on the Kol River, a wild, intact salmon river, working alongside the graduate student she had assisted the year before, a handful of Russians — and her future husband, Josh Epstein, who was an assistant to another graduate student in the group. "The area has the highest density of grizzly bears anywhere in world, we had to be helicoptered in, and there were no human inhabitants in the area. Thank goodness we all got along."

Each of the members of the research group was looking at some aspect of the ecology of salmon. Eberle was studying juvenile salmon and their feeding habits in different habitats. "We were looking at how these pristine sys­tems worked so that we could come back to the Lower 48 and apply that knowledge to our more impacted rivers."

After earning an M.A. in biology, Eberle remained at the University of Montana as a staff scientist. For two and half years, she conducted research on remote salmon rivers in Northern British Columbia and worked on river restoration on the Umpqua, Ya­kima, and Klamath Rivers, where she was exposed to the controversy surrounding the removal of dams

In 2009 she moved to Oregon and joined Columbia Riverkeeper (columbi­ariverkeeper.com), a member of the inter­national Waterkeeper Alliance. She lives in Hood River, Ore. with Epstein, who works for a river restoration consulting firm. At Riverkeeper Eberle trains volunteers, each of whom adopts a site along the 1200-mile-long Columbia River, to use water quality monitoring equipment and report to her. "In the fight for clean water, my avenue has hap­pened to be via salmon, but there are lots of different ways to do it. Being in the Pacific Northwest brought me to salmon and to an understanding of the critical role they play in the history, culture, and biology here," said Eberle. "Salmon are resilient, and if we give them half a chance, they can come back. But we can't seem to give them half a chance."

Eberle's research in Russia and British Columbia makes her a member of a small club of old timers and researchers who even know what a fully functioning salmon river looks like, who know just what the Colum­bia, and so many U.S. rivers, could be. "This job combines my love for public education and research."

While she is a scientist at heart, science was only one of Eberle's many interests at Baylor. In addition to climbing and kayak­ing with Walkabout director Tim Williams, she was on the track team and ran cross country and still runs today. She was a diver and a swimmer for a couple of seasons, and she was a member of the film club, Inner Circle.

Baylor's emphasis on writing was some­thing Eberle came to appreciate in college, where she discovered just how well pre­pared she had been by outstanding Baylor teachers."I had Sue Gawrys for AP English. She and Heather Ott provided incredible fe­male role models for me, and Joe Gawrys was the best teacher I ever had."

Ten guests at Eberle and Epstein's wed­ding last summer were Baylor alums. "My later-in-life friends are so surprised that I'm still close with my high school friends. But that sense of community stays with you the rest of your life." 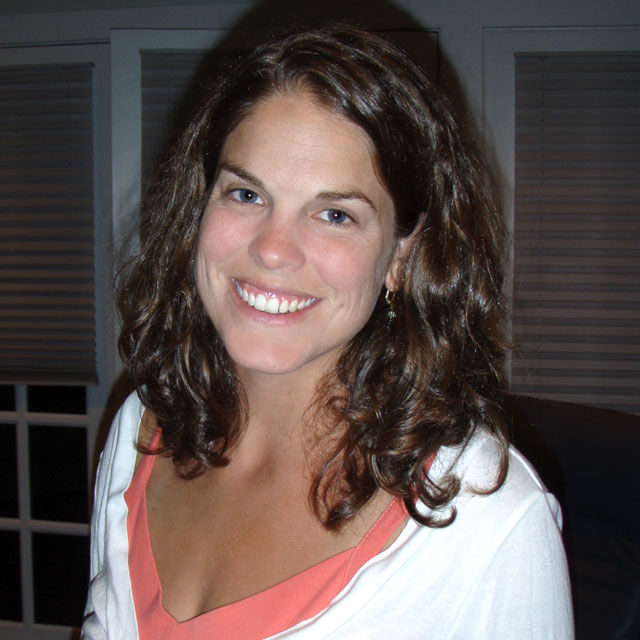