Not everybody decides to climb the highest peak in the lower 48 states "just for the challenge," but then again, Laurel Creech isn't just anybody. For the past several years, this avid cyclist, runner and outdoorswoman has been using her role as one of Nashville's most popular D. J.'s to promote respect for the environment through her brainchild, Team Green.

"When I was given the task of creating Team Green [which began as an environmental clean-up promotion for Laurel's station, WRLT Lightning 100], I envisioned it as a way to connect more people to the great outdoors," explains Laurel, a recent graduate of Nashville's select Young Leaders program. "We provide a variety of free adventures for any and all members of our community, the goal being that in addition to enjoying healthful activity, participants will take the time to appreciate, respect and care for the environment."

And so far, the program is a resounding success, growing from a few participants and one event each quarter to a mailing list of more than 3000 and over 150 treks a year -- sometimes more than one a weekend. The adventures, which run the gamut from roller blading clinics, day hikes or weekend trips around the region, to hiking the Grand Canyon or rafting in Costa Rica, are primarily free, and open to all ages and ability levels.

A life-long athlete who started out as a competitive figure skater, Laurel originally planned to purvey her health-conscious lifestyle into a career in public health, discovering her affinity for radio almost by accident. "As a college freshman in Washington, D.C., I accompanied a friend to tryouts at a local radio station. Since I was there, I decided on a whim to try out, and ended up with the most fantastic Sunday night shift!." A summer's internship at Lighting 100 in Nashville then sealed the deal.

And in keeping with her own health-conscious lifestyle, she also chairs Nashville Metro Health Department's Community Health and Wellness team, and as a result of her involvement with Walk/Bike Nashville, she has recently been appointed to the Citizens' Advisory Board for Nashville's Strategic Plan for Sidewalks and Bikeways. 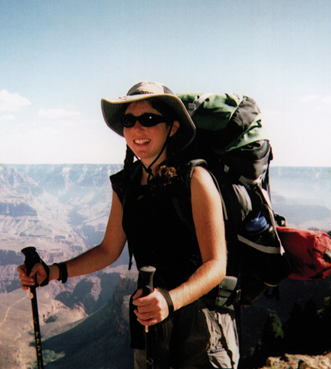