If you've been wondering what former Baylor Player John Michael Weatherly '98 has been up to lately, just check out Robert Redford's movie "The Conspirator," which opened nationwide in April starring Robin Penn Wright, James McAvoy, and Evan Rachel Wood.

A boarding student from Fort Payne, Ala., resident of Probasco Hall from 1994-1998, and a 2002 graduate of Auburn University, Weatherly plays the role of George Atzerod, one of the four defendants on trial for the conspiracy to assassinate Lincoln.

"Working on 'The Conspirator' was amazing, and having the chance to work with Robert Redford was pretty incredible. He's an actor's director and was very personable. It was very intimidating to meet him, and the first thing he said was, 'Call me Bob.' Of course I'm a Southerner, so I always called him Mr. Redford. He was great, very supportive, nice, and encouraging."
Weatherly, who has an agent in Atlanta and in Nashville, says he's focused on film rather than commercials but has also been active in the past in the Nashville theatre scene and will continue auditioning for plays if the right one comes along.

Weatherly is shown at left with Sam Shepard in "Tough Trade," a made-for-television film about a three-generation Nashville music dynasty, and is pictured second from left in the top photo.
? Check out his bio, films, and general whereabouts on
his website www.johnmichaelweatherly.com 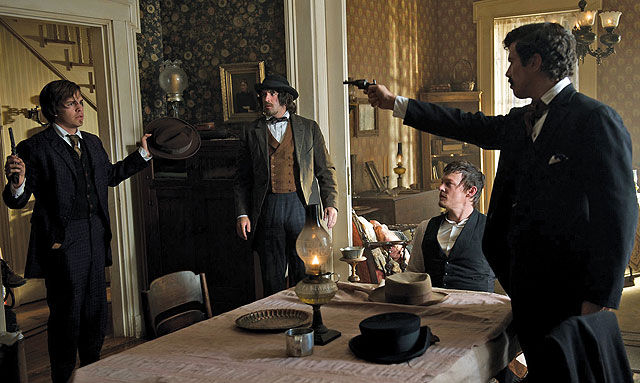