Johnny's career interests began during his summer job as a lifeguard at a municipal pool in his home town of Alcoa, Tennessee, where he would recover money from the pool's bottom. While attending the University of Tennessee, he continued his diving during the summer months. A two-sport letterman in baseball and swimming, Johnny planned a career in teaching and coaching. While earning a degree in education with a minor in English, Johnny reconsidered his plans after developing knee trouble during baseball. "I started looking for a profession where I didn't have to wear shoes," he jokes, "and diving was it."

After a two-year stint of military service, Johnny and a friend moved to Louisiana and founded World Wide Divers, Inc. Their plan was to work nine months out of the year and take the remaining three to treasure dive in the Bahamas. As Hurricane Hilda wreaked havoc on the offshore oil industry that year, the young entrepreneurs never got those three months off and have worked steadily ever since.

The company expanded quickly, buying out other companies on the West Coast and in Canada. In 1969, Johnny and his partner merged with another company to form Oceaneering International. The new company flourished and began to develop highly specialized techniques and equipment to meet challenging demands of their industry. Concerned about the safety and cost effectiveness of diving great depths, the company developed cutting-edge technologies like the JIM, an atmospheric diving suit enabling divers to work at depths up to 2,200 feet. OII also developed remote units operated by shipboard controllers which allow exploration at depths up to 26,000 feet. The company continues to develop new technologies, including Oceaneering Space Systems (OSS), a division which serves the space industry.

Johnny cites teamwork and time management skills he learned during his five years at Baylor as important lessons for operating his business. "The experiences I had at Baylor are ones I'll always carry with me," he says. 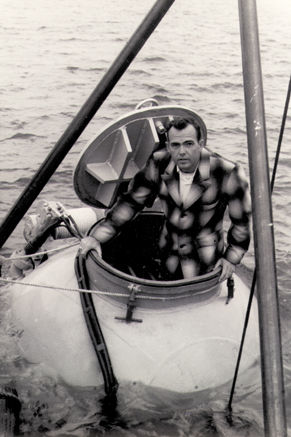