When Jennifer Eitel Young '92 (shown above left) and Stephanie Eitel Farrar '95 were Baylor students, they wouldn't have predicted they would be business partners one day. "Steph and I took very different paths in high school," said Young. "She was a stellar athlete with high respect from her peers, and I pursued the theater arts and was more academic."

They are still different — Young is blonde and settled in Austin, Texas, and Farrar is a free spirited brunette who feels at home in Los Angeles. But the sisters, who jokingly called themselves "the real American Eitels," share a love of music, and their disparate paths gave them the complementary skills they needed to establish their music label, Ea­gle Ear Entertainment (www.eagleear.com)

And it all started at Baylor School. Young was in the first class of girls that entered Baylor in the seventh grade. "Ed Huey prob­ably had the greatest influence on my life to date," she said. "He gave me tremendous encouragement. I was one of the first girls to do a senior recital in vocal performance, and he dedicated hours to help me prepare." She calls Sue Gawrys, who took an interest in Young's writing, "a wonderful mentor." She also credits Schaack Van Deusen '61, "a great inspiration," for helping her find the confidence to address a group.

After graduation, Young attended Baylor University in Waco, Texas, where she earned a B.A. in English literature with a minor in music. She then moved to Austin and joined the business community. But her desire to sing could not be ignored, and Young was soon performing for a wide range of artists and dignitaries that included Kenny Loggins, John Denver, President George Bush, Sr., and the Pointer Sisters. She also produced a reli­gious record, "The Word Through Music," and made recordings for corporations.

In 1989, Farrar became a Red Raider and distinguished herself as an all-state soccer player and a member of the tennis team, and she broke school records for track and field. (She still plays tennis regularly and is train­ing for her first half marathon this fall.) Like Young, she loved singing — the sisters par­ticularly enjoyed performing the soundtrack from "Grease" together — but Farrar chose another outlet for her creativity. "It was be­cause of (John) Doc Miller that I developed a passion for writing, film, and literacy. He was my advisor and mentor, and I've looked up to him my whole life." She also shares Young's appreciation for Heather Ott's teaching and says that "Coach Bill McMahan '67 and Priscilla Birdsall were monumental to my development as a person." Farrar has fond memories of (Latin instructor) Floyd Celapino, who "treated us like adults and never looked down on us."

After appearing in several short films and television spots, Farrar became a sought-after studio singer and a back-up singer for Maroon 5. She sang with Weezer on "Late Show with David Letterman," "Hard Rock Live," and "Jimmy Kimmel Live!" and wrote the theme song for the NBC sitcom "Quar­terlife." Farrar was a keyboardist and singer with the band Agent Sparks from 2005 until her 2007 marriage to Sam Farrar, a bass play­er raised in a musical family. Sam's father is a Grammy-winning songwriter, and his mother sang and danced with Olivia Newton-John, with whom Young and Farrar are now close. "I feel blessed to have met and married Sam," said Farrar. Still passionate about writing and film, Farrar is working on a screenplay about a woman who puts her singing career on hold because she's pregnant.

Farrar and her husband have an eight-month-old daughter, Vesper. Young and her husband, Jason, whom she married in 1996, are the parents of a son, Jackson, six, and a daughter, Julia, three. The time management skills the sisters learned at Baylor are being put to good use as they keep up with their busy households and run Eagle Ear Entertainment together from different time zones.

"Our goal with Eagle Ear is to continue to pursue our own music while we keep ourselves relevant. We find talent and help other artists reach their potential," said Young. Eagle Ear, through a combination of an artist develop­ment program, social networking, and pro­motion, brings independent artists, fans and industry representatives together. The sisters work with Young's husband, who serves as marketing director, and an SMU classmate of Farrar's who handles business development. "We can offer a lot to clients because of the diversity in our backgrounds," said Young, re­ferring to her own background in religious mu­sic and Farrar's experience in a touring band. "No matter what you come from or what you believe in, music unites us," adds Farrar.

"I knew I couldn't breathe without pursu­ing a creative field. I am so thankful that I get to do what I love daily," said Young. "It is something our teachers at Baylor encouraged — to find what you're passionate about and to go after it." 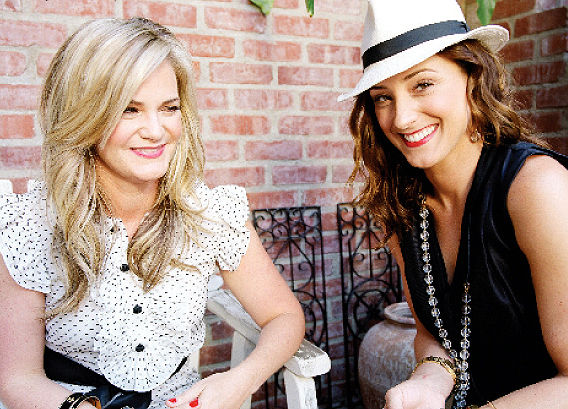