Capt. Marisa Catlin's childhood fascination with planes has taken her around the world but not as a typical passenger.

"As a kid, I told my mom I wanted to work at the airport," said Catlin. "She asked why, and I told her because I thought flying was cool. She said, 'Let's think a little bigger.'"

After graduating from the Air Force Academy in 2001, Catlin completed helicopter school and became an HH-60G Pave Hawk pilot. While she was stationed at Royal Air Force Lakenheath outside London, Catlin logged more than 500 combat hours in Afghanistan and Iraq, conducting personnel recovery and casualty evacuation operations. As a member of a rescue squadron in Bagram, it was not unusual for Catlin to fly her aircraft in hostile conditions, but she said that being under fire wasn't as terrifying as it might seem. "Everybody probably has their own reactions to being shot at," she said. "We train so much that I think it almost desensitizes you. When it happens, it almost feels like it's not that big a deal."

After spending three years at Lakenheath, Catlin has traded active combat for the classroom, serving as a flight instructor at Kirtland Air Force Base in Albuquerque, N.M. 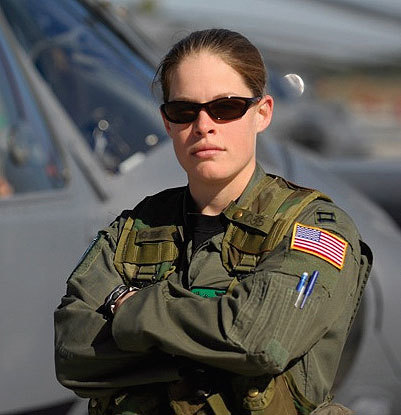