Although Callie Taintor Wiser '98 fully appreciates Baylor's academic rigor, she is most grateful for the other ways in which Baylor prepared her for the University of North Carolina's Morehead Scholarship — and for a career as a documentary film producer.

"Baylor fosters the curiosity that makes you want to keep going until you have the answer," says Wiser, who gives as an example her seventh grade geography teacher, Fred Hubbs, in whose class she "was challenged in a way that made me want to challenge myself." While Hubbs made it clear that perfection was not attainable, Taintor says that he encouraged students to strive for it as a means of setting high expectations.

Wiser also thanks Baylor for developing her time management skills. "School work was primary at Baylor, but having to take part in an extracurricular activity gave us a sense of what it takes to balance your life." Wiser's after-school activities included cross country, High Energy dance, and swimming. She notes that the inclusion of a free period gives students another opportunity to discover what works before college, where the use of time is not mandated by the school.

Wiser's success at finding balance earned her Baylor's O.B. Andrews Award, a Herbert B. Barks, Jr. Award, and the prestigious Morehead Scholarship at UNC. Summer enrichment was a key component of the Morehead program and, in the summer before their senior year, scholars designed their own courses of study.Wiser and another scholar decided to head to Argentina, where Wiser would make a documentary film and together they would produce a short news package about the same subject.

After an intensive refresher language course in Buenos Aires, the pair established local contacts and settled on a project. Las Abuelas, the Grandmothers, is an organization of women whose children were kidnapped. The children of their children, infants at the time of their abduction, were then adopted —some by couples who knew nothing about the kidnappings and others by couples who knew the truth. Wiser's 13-minute film, Los Desaparecidos, The Disappeared, about the children and their grandmothers' efforts to find them, completed her senior independent study at UNC. The news story she and her companion produced won a student Emmy Award.

"I am a documentary film producer because of Baylor School," said Wiser. I couldn't have gotten the Morehead Scholarship — the most amazing thing that could have happened to me — if I didn't attend a nominating school, and I wouldn't have made my first film if it weren't for the Morehead."

Taking it a step further, you could say that Wiser wouldn't be married to her husband, Mike Wiser, if it weren't for Baylor. The couple met at Kirk Documentary Group in Boston, a job Wiser heard about through a Morehead alum. Wiser, then a production assistant/ production coordinator, worked alongside her future husband. For a year and a half, the bulk of Wiser's work was for the PBS program FRONTLINE.

Most documentary films for public television are made by small production companies, where by nature of their size, opportunities are limited. Wiser wanted a broader experience and, in 2004, she decided to establish herself as a freelance producer. After a couple of tough months, Wiser met David Breashears, the filmmaker and adventurer who was shooting an IMAX film about Mount Everest in May 1996 when a blizzard struck, killing eight climbers. Breashears and his crew assisted in the rescue of explorers stranded on the mountain before reaching the summit to shoot the first IMAX film images from the top of the world.

Taintor told Breashears she'd be available to work on any future projects, and he contacted her when he pulled together his production team for the film, Storm Over Everest, in which he returned to Mount Everest to relive that tragic spring. "I remember when Sir Edmund Hillary came to speak at Baylor," said Wiser, who served as co-producer of Storm Over Everest. "To now see Nepal from his (Breashear's) perspective was unbelievable." Shot as an independent film, Storm Over Everest aired on FRONTLINE on May 13, 2008 to much acclaim.

Wiser moved on to work as producer on her next project — a 2 1/2 hour documentary about President George H.W. Bush for PBS's American Experience. Both FRONTLINE and American Experience are produced at WGBH, the public television station in Boston, and Wiser is currently at work on another WGBH production called We Shall Remain. Wiser is the multimedia producer for the website that serves as a companion to a five-part television series presenting a Native American perspective on American history. As multimedia producer, Wiser manages the design and development of the site as well as producing the video elements that will be available exclusively on the web. The documentary series will air this April.

"What I love about working on documentaries is that you get to be a mini expert on something and then move on to a completely different subject." Wiser has always relished learning and fondly remembers how Baylor's Joe Gawrys encouraged students to look at things from another point of view. "He opened my eyes to the entirety of the world view and made me want to learn more." A member of Baylor's film club, Inner Circle, Wiser also remembers watching films with her adviser Doc (John) Miller and says she still applies the critical thinking and assessment skills she practiced back then as she works today to merge visual elements with the words to tell the story.

"Baylor fosters the curiosity that makes you want to keep going until you have the answer." 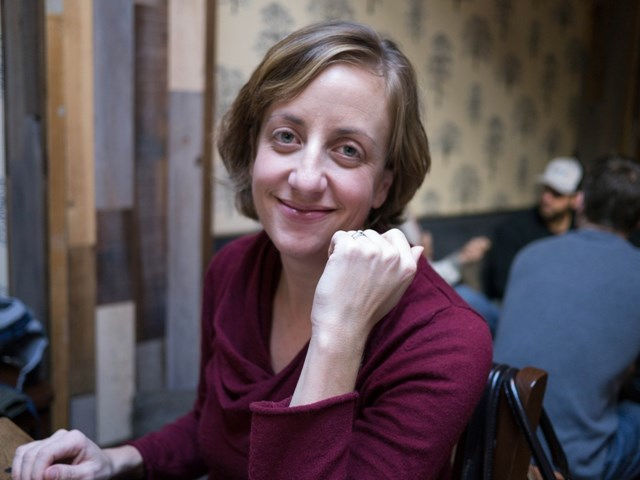