If anyone could convince you to exchange thirty dollars for a twenty dollar bill — and to do so gladly — it would be licensed auctioneer Ben Farrell '88. Auctioning a twenty dollar bill is one of many techniques Farrell uses to remind crowds at fundraising auctions that they are not there to shop for deals.

"I have the greatest job in the world because I get to see people at their very best, when they are giving from their hearts, giving for causes they believe in."

Farrell has always been fascinated by auctions, and his first memory of a fundraising auction was when he was in fifth grade and outbid a classmate and the classmate's father for a Gene Simmons's solo album at the height of Kiss's popularity. In 1998 when Farrell and his wife, Heidy, bought their first home by auction, he was impressed by the auctioneer and began attending more auctions. In 2004, after working for several years as a police detective in Chapel Hill, N.C., Farrell made the decision to enroll in the Mendenhall School of Auctioneering.

Just after he completed the course, Farrell and Heidy organized a fundraiser to pay for a therapy for their younger son who has autism. (The couple has two boys.) Along with two other auctioneers, Farrell auctioned items donated by family and friends to meet their goal and also helped another family in the same situation to meet theirs.

"I was blown away by the whole thing and knew I'd be doing this [auctioneering] from now on," said Farrell. The couple now owns Custom Benefit Auctions. Farrell conducts auctions for schools (including Baylor), foundations, hospitals, museums, and professional associations, and also does real estate auctions. From mid-January to June and September through November, Farrell is booked most weekends. "And every single time out, it is just as exciting." 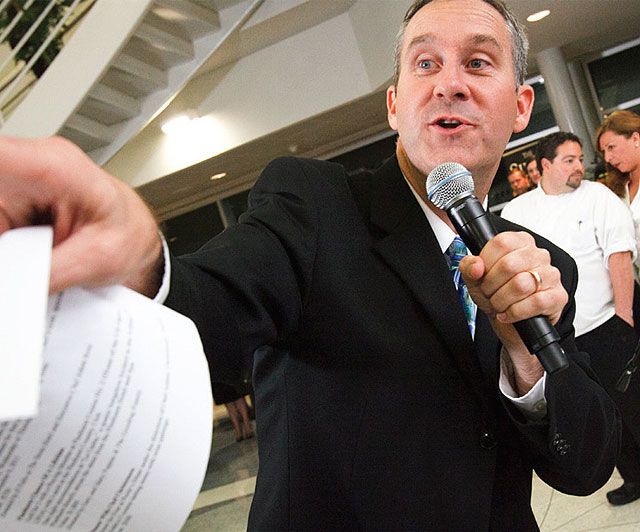