The following article was excerpted from a feature by Margaret Matens, which appeared in the 1988 winter issue of Baylor Magazine. For a podcast of Moser's 2006 address to the student body click here.

In a corner of Barry Moser's two-level studio hang his awards – a certificate naming him "A Living New England Treasure," an American Book Award for design and illustration, a medal of the National Academy of Design, diplomas, awards from the American Institute of Graphic Arts, from the New York Times, and on and on. Right in the middle of this impressive array of awards Moser has placed a small motto, beautifully engraved by Leo Wyatt, bearing these words: GOD WILL NOT EXAMINE OUR MEDALS & DIPLOMAS BUT OUR SCARS

The awards are fine, Moser concedes, along with the fame and recognition that eventually led to requests by major publishing houses and the opportunity to work with authors such as Eudora Welty, William Kennedy, and Joyce Carol Oates. Samples of his work are housed in museums and libraries ranging from the British Museum to the Library of Congress and the National Library of Australia, as well as Harvard, Cambridge, UCLA, and Princeton Universities. But it's really the work that matters to Moser: the struggle, the scars earned in the pursuit of his art.

And some of the earliest and deepest scars inflicted on Moser on his way to becoming one of the foremost illustrators, wood engravers, and book designers in the country came from his days at Baylor. "To say that my artistic bent was not encouraged at Baylor is an understatement," he said. For Moser, his six years as a "day boy" at Baylor (1952-1958) contain mostly "bittersweet memories." He recalled, "One memory that still stings is of the day in Rene Bazan's Spanish class when I was caught drawing a naked woman in the blank verso of my text book." Although for Moser the sketch was an attempt at serious figure drawing, the Commandant viewed it as schoolboy obscenity, gave him two weeks "disorder," and busted him from sergeant to corporal. There was not a single art course offered at Baylor during these military heydays. The only encouragement Moser remembers came from his biology teacher, Jack Stanford. Stanford, who assigned his students to make notebooks in biology, was impressed with Moser's drawings of frogs and paramecia, and praised his talent. "I ran into Jack years later," said Moser, "and he told me he still kept my notebook in his desk-as an example to other students of what could be done."

Moser is quick to point out that Baylor was not alone in its lack of artistic sensibilities. His own family was aghast that he wanted to become an artist. "They OK'd my majoring in industrial design in college," he explained. "It, seemed somehow masculine enough for me to design car bodies. A young man growing up during the 40s and 50s in the South was expected to do 'manly' things. A man was measured by how well be played ball and the extent of his gun collection, rather than the size of his library."

After he graduated from college, he accepted a teaching position at McCallie "because I wanted to get married, and they happened to have an opening for a mechanical drawing teacher." He fared no better in that environment. He was once denied his yearly raise for what they termed a "lackadaisical" attitude, and he was called on the carpet for stowing his eighth grade football team's gear while it was still damp. "The entire five years I was at McCallie my father was worried that Spencer McCallie would somehow discover that I was painting nudes in my studio at home," he said with a chuckle.

So Barry Moser pulled up stakes and left the South, left his people, left his heritage, left Baylor and his childhood friends, moved his wife and two babies to New England, and has never looked back. But he didn't entirely distance himself from his past, because he remained in teaching. Moser taught 15 years at Williston Academy in Easthampton, Mass. He never forgot what it felt like to be an 11-year-old boy suddenly thrust into the militaristic world of Baylor. "That is such a formative time; especially for boys it is an intensely impressionable age." And as a teacher, he remembered and was drawn to the kind of student he had been. "The kids that I doted on were the dreamers, the late-bloomers, the ne'er-do-wells. I wouldn't give you a plug nickel for the straight 'A' -students."

All during his years of teaching, Moser was continually laboring at his art. "Finally one day," he said, "it reached the point where I realized I couldn't teach anymore. Although I enjoyed teaching, it became a financial liability. It was a little unnerving to leave Williston," he admitted. "Since 1945 when I entered grade school, there hadn't been a year I wasn't in a school. When I quit, the headmaster agreed to let me return if I had 'withdrawal pains,' but I never did."

And surely part of the reason Moser never missed the classroom has been the unqualified success he has met with since 1970 when he established Pennyroyal Press in Massachusetts. (The name of his press, he explained, is an oxymoron describing his goal: regal books made with very little money.) Since establishing his own press, he has illustrated more than 80 books, including Arion Press's Moby Dick, an edition of The Aeneid and of Dante's Divine Comedy published by the University of California Press. His 1982 edition of Alice's Adventures in Wonderland, published by Pennyroyal Press, won the American Book Award for design and illustration. It was followed by its sequel, Through the Looking Glass and what Alice found there, which is illustrated with 95 wood engravings. In 1985 Moser was commissioned to illustrate the centennial edition of Huckleberry Finn as well as limited editions of Richard de Fournival's Bestiaire d'amour and of The Wonderful Wizard of Oz. He has since worked with other contemporary writers and poets, including Joyce Carol Oates, Newberry Winner Virginia Hamilton, Nancy Willard, Archibald MacLeish, Lawrence Ferlinghetti, and Robert Francis, William Kennedy, Ellen Gilchrist, and Jayne Anne Phillips. In 1999, he published the monumental Pennyroyal Caxton Bible, a four-year labor of love that includes 230 engraved illustrations.

Baylor - A Sense of Place

Today, Moser lives in rural Massachusetts and although he left the classroom years ago, Moser often finds himself behind the podium as a widely sought-after lecturer. In 2006 he gave a keynote chapel address to the Baylor student body and returned again in the spring of 2007 to conduct a workshop for art students.

"Eudora Welty talks about 'a sense of place/about the importance of certain places in one's life, and, for me, Baylor is one of those places. Whenever I come to Chattanooga, I always try to make time to drive to the campus. It is an exceptionally beautiful place." 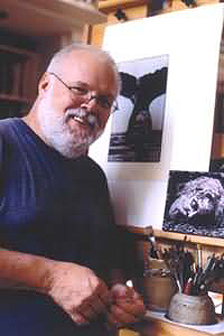