The stacks of notebooks surrounding Ashleigh Dawkins Pipes '94 for much of last summer and this past fall have been placed in the hands of children 7,000 miles from her home in Jacksonville, N.C.

Married to Maj. Ben Pipes, who recently served with the Marine Corps' NATO Training Mission in Afghanistan, Pipes collected the notebooks for school children in Afghanistan. Her inspiration came from Three Cups of Tea: One Man's Mission to Promote Peace ... One School at a Time, a New York Times bestselling book by Greg Mortenson and David Oliver Relin.

"The novel describes poverty and ignorance as the root causes of terrorism," says Pipes, adding that General David Petraeus similarly stated that the 'decisive terrain in Afghanistan is the human terrain' and wrote about compassion for the Afghan people in his July 4 letter to the troops of the NATO International Security Assistance Force.

The mother of a two-year-old, Katie, and an adjunct instructor at Coastal Carolina Community College, Pipes says she was interested in establishing a connection to her husband's deployment and decided to collect and mail 179 notebooks. "That's one notebook for each day he was there. As I collected the notebooks, I mailed them to the chaplain's office at Camp Eggers in Kabul. Volunteers then sorted the donations and distributed them to needy schools." The numbers eventually climbed to 600 notebooks and 1000 pencils.

Pipes says that she is still accepting donations but is not actively seeking them for now. "Ben returned in December, so I'm focused on encouraging other spouses to try similar projects and on helping them get started." 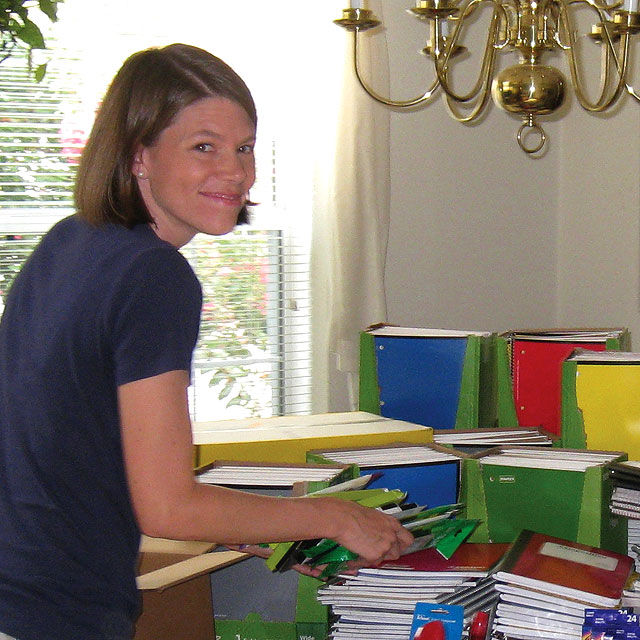