In early 1893, a group of Chattanooga businessmen set out to find an educator who could open a college preparatory school for "the young men of the city." Their search leads them to John Roy Baylor, a graduate of the University of Virginia. On September 12, 1893, Baylor's University School opens in an old house in downtown Chattanooga with a student body of 31 boys ranging in age from 10 to 17. The tuition was $100.

In 1915 the school moved to its present location overlooking the Tennessee River. The move to the new campus was spearheaded by local businessman John Thomas Lupton, whose family amassed a fortune through their Coca-Cola bottling companies. One year later students adopted a formal Honor Code that is still in effect to this day.

In 1954, Baylor became the only school in the South invited to participate in the national experiment known as the School and College Study of admissions with Advanced Standing, which later became know as Advanced Placement. Today, the school offers 20 AP courses and several faculty members are selected to serve as AP exam readers each year.

In 1976 the nationally acclaimed Walkabout outdoor program began the tradition of taking seniors on a two-week climbing, rafting, and backpacking trip in lieu of final exams. Known as the Senior Trip, it has since become the cornerstone of the Walkabout program. Seniors spend the last six days of their Baylor careers on a wilderness adventure that includes a service component with the National Forest Service.

Today, Baylor enrolls students in grades 6-12. Our boarding program draws students from around the country and the world, who are attracted to the school by a strong academic program, diverse extracurricular activities, and a nurturing residential atmosphere. 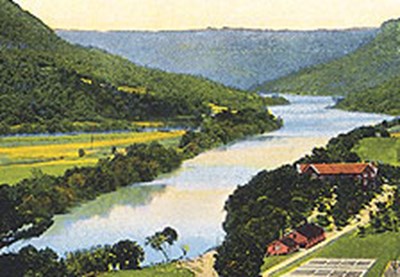 1893 - On September 12, 1893, Baylor's University School opens in an old house in downtown Chattanooga.
1915 - The school moves to its present location overlooking the Tennessee River.
1916 - The Baylor student body adopts the Constitution of the Honor System.
1917 - Shortly after WW I, Baylor becomes a military school, fully accredited by the U.S. War Department.
1925 - The official name is changed from Baylor University to Baylor School.
1926 - Professor Baylor dies. Dr. Alexander Guerry becomes the school's second headmaster.
1929 - Dr. Guerry leaves to become president of the University of Chattanooga and later the University of the South. He is succeeded by Herbert B. Barks, Sr. who will serve as headmaster for the next 35 years.
1954 - Baylor is one of the first 38 secondary schools in the country (and the only one in the South) to participate in the College Board Advanced Placement Program.
1964 - Dr. Charles E. Hawkins, III, the school's fourth headmaster is appointed.
1971 - Baylor discontinues its military program. Dr. Herbert B. Barks, Jr. becomes the school's fifth headmaster.
1973 - The Baylor Red Raiders win the state football championship and are named National Champions by the National Sports News Service.
1985 - Baylor becomes coeducational, admitting 42 girls in the ninth and tenth grades.
1988 - L. Laird Davis, Jr. is elected Baylor's sixth headmaster.
1989 - The first female boarding students are admitted. The total enrollment of 700 students includes 200 girls.
1993 - Baylor celebrates its centennial with a physical plant valued at more than $40 million, and an endowment more than $30 million.
1998 - Jim Buckheit is hired as Baylor's seventh headmaster.
1998 - The new Fine Arts Center Complex is dedicated.
1999 - The new $6.5 million Weeks Science & Technology Building opens.
2001 - Baylor's new sixth grade program is launched.
2004 - Dr. Bill Stacy is hired as Baylor's eighth headmaster. Dedication for the new aquatic center and Worsham wrestling arena take place.
2005 - Sports Illustrated lists Baylor athletics among the country's top 25 programs and first in the state.
2009 - Scott Wilson is hired as Baylor's ninth headmaster.
2012 - A $1.5 million dollar renovation of Hedges Library was completed.