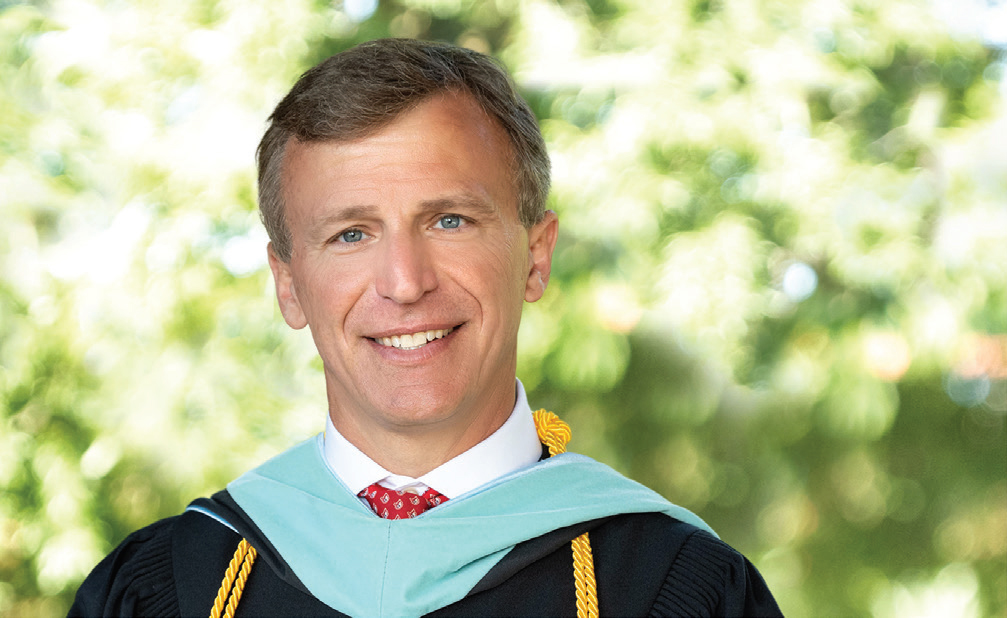 Chris Angel ’89 has been a Baylor student, athlete, alumnus, teacher, coach, dorm parent, and administrator, and settled into his new role as our Head of School on July 1, 2021. Most recently he served as headmaster at Hammond School (2009-2021) in Columbia, S.C., a college preparatory day school for boys and girls in pre-kindergarten through grade 12. Prior to that he was Hammond's Upper School Head from 2002-2009. A graduate of the University of Georgia with a B.S. degree in biology, Chris also received his M.A. degree in private school leadership from Columbia University in New York City. He and his wife, Peggy, have three daughters: Rosemary and Lilly, who attend the University of Georgia; and Abigail, a member of Baylor's Class of 2025.

Get to know Chris:

How did your career progress at Baylor, and how did that lead to administrative leadership?
For three years, I taught biology and chemistry, coached football, and track, and lived in Lupton as a dorm parent. Doug Hale, associate headmaster, asked me to step into the role of dean of the 11th and 12th grades. I was honored that he had confidence in me at the age of 26, and I agreed to do it. I continued to teach a chemistry class as well, and I enjoyed the new responsibilities, including working closely with (retired dean of 9th and 10th grades) Sue Ramsey. I worked as dean for five years and started thinking about what I wanted to do in the future. Former Baylor Head of School Herb Barks ’51 and I had stayed in touch, and he kept reaching out to me, asking me to visit him at Hammond School in Columbia, S.C., where he was serving as headmaster. Upon visiting, I enjoyed seeing so much student and headmaster interaction while walking around campus with Herb. His love of kids took me back to the years when he was my headmaster at Baylor and influenced the way I wanted to operate. At that time, Hammond’s campus and buildings were far inferior from what I was accustomed to at Baylor. It was my first real revelation that schools are not about buildings; they are about people – they help facilitate teaching and learning, but it’s the people that are most important. In 2002, Herb took a big chance on me by asking me to run a division of the school at the very young age of 31, and I loved working with Herb. His leadership style allowed me to have an enormous amount of freedom in running the upper school. He was wise to understand that experience is often the best teacher, and I had to learn some things the hard way about ownership and accountability, but that would prove to be advantageous for me in the long run. I’m eternally grateful for our time together.

What excites you the most about returning to Baylor as the next Head of School?
For me, Baylor played such a significant role in my life and impacted me in so many ways. I am just excited about returning and, with a great team, being able to make a positive difference in the lives of kids and adults. As headmaster, you have the opportunity to impact students on a larger scale, but also, one of the things I have loved over my career as it has evolved is making a difference in the lives of adults as well. I try to filter most decisions down to do what is best for kids, but I also love to guide and mentor faculty and staff members. I am proud of the community that we have built at Hammond – that strong sense of family and connectedness is one of the things of which I’m most proud. It’s powerful, and that’s what I remember about Baylor. I am excited to take the baton from Scott (Wilson) and continue to foster that culture and community. It’s all about the relationships – that is what I experienced as a student and as a faculty member, and I am looking forward to continuing that as headmaster at Baylor. Ultimately, I look at Baylor as coming home, and I’m beyond excited to do so! Go Big Red!